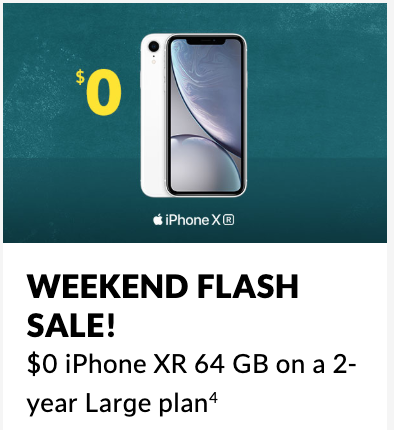 Fido says for this weekend, Freedom Mobile customers porting their number over in-store can get Apple’s iPhone XR 64GB for $0 upfront, along with a $75/10GB plan on contract, with a waived activation fee.

The deal is Fido’s Large plan which is at $95/10GB and unlimited Canada-wide minutes, but with a $20 per month credit for 24 months, taking the plan down to $75/10GB. Data overages are billed at $15/1GB since these plans are now under Fido’s Data Overage Protection, which pauses your data once you run out.

The Fido store at Hillside Mall in Victoria, B.C., confirmed the promotion over the phone, which appears to be available nationwide (via RFD).

For Freedom Mobile customers, they can get an iPhone XR for $0 upfront and on a $0 Tab, with a $75/15GB plan, which also includes 2GB of nationwide roaming data on top. This offer is part of the company’s Absolute $0 promotion.

The Fido offer is targeting Freedom Mobile customers seeking to upgrade to the iPhone XR on the company’s $75/15GB Big Gig plan. The Fido plan has 5GB less data, but includes wider nationwide coverage outside of cities Freedom Mobile operates in.

Another iPhone XR sale this weekend is available from Koodo, offering the phone for $220 upfront on Medium Tab, plus a $100 credit, which takes the phone down to $480.

Apple is expected to launch a second-generation iPhone XR at a rumoured September 10 special event.

Image via RFD Rogers and Fido appear to be offering up another 5GB of free data, but for 18 months. That’s according to Fido customers that shared screenshots of the text messages sent out by the wireless carrier on Wednesday. According to the text message, Fido says this exclusive gift is a thank you for […]
Gary Ng
21 hours ago