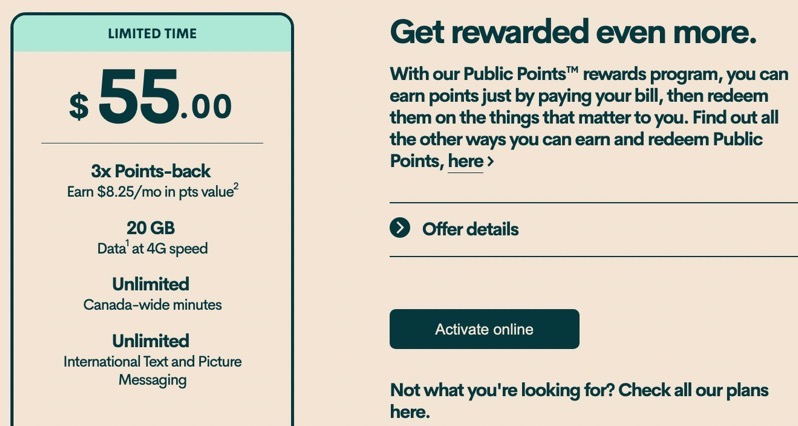 Telus-owned Public Mobile has launched a student plan promo for 2022, offering a $55 plan with 20GB of 4G speed data.

Public Mobile says new activations will also get 3x Points-back, resulting in “an extra $8.25 in points value on our Student Plan!”. In other words, you get 15% points-back for 12 months on your plan renewals and add-ons. Normally, this is at 5% points-back. 1 Public point earned is valued at 1 dollar when redeemed.

This 2022 Public Mobile student plan is only available for new customers who activate only.

Public Mobile 3G speed plans are limited to 3 Mbps download speeds, but the recent re-introduction of 4G speed plans in July now offer download speeds of up to 100 Mbps. At the time, a $55/month plan only included 8GB of 4G speed data, so this student offers more than double that amount. Currently, the closest 4G speed plan is at $85/month for 25GB of data. Looks like it pays to be a Van Wilder wannabe.

Bell Media has announced what’s coming to streaming service Crave in October 2022. Highlights include the season two premiere of HBO’s Avenue 5, along with season two of The White Lotus. Check out the full listings below of what’s coming to Crave for October 2022 on HBO, HBO Max, Showtime, Starz and what’s leaving this […]
Gary Ng
23 hours ago