Rogers and CIBC have proudly announced they have performed the first mobile credit card transaction (via Rogers suretap) in Canada using a mobile credit card tied to an NFC-enabled BlackBerry, demonstrated at Tim Hortons with the help of Olympian Simon Whitfield. 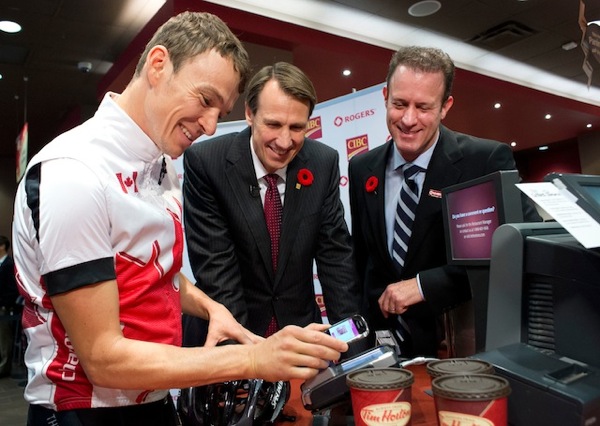 “We’re pleased to make history in mobile commerce in Canada by completing the country’s first mobile credit card transaction,” said David Williamson, Senior Executive Vice-President and Group Head, Retail and Business Banking, CIBC. “Getting a coffee while you are on the go is just one example of the kind of transaction that’s going to be made easier when you can pay in just seconds with a CIBC credit card on your smartphone, and we’re excited about the possibilities this offers our clients.”

“Canadians are amongst the most connected consumers around the world, and we have put Canada on the world stage today as a global leader in mobile commerce,” said David Robinson, Vice President of Emerging Business, Rogers Communications. “We are passionate about delivering technology innovations and powering new mobile experiences for our customers,” said Robinson. “Making the first mobile credit card payment means that we are one step closer to allowing Canadians to store everything they need, securely, in their smartphone.”

Rogers customers that hold CIBC VISA or MasterCard credit cards will be able to pay at contactless payment terminals and have charges billed to their respective credit card accounts, via the CIBC Mobile Payment App. The latter will be available at first for the BlackBerry Bold 9900 and Curve 9360 on November 16th. NFC SIM cards (provided by Gemalto) can be ordered today online and will support Android and Windows Phone 8 smartphones in 2013.

A recent study, timely published today by Harris/Decima notes 44% of Canadians claims to own a smartphones with 47% of them interested in using mobile payments. Are you ready for NFC credit card payments from your smartphone?