With both Bell and Telus supporting cellular Apple Watch Series 3 LTE, Rogers has been left behind, leaving some customers frustrated about the lack of support. 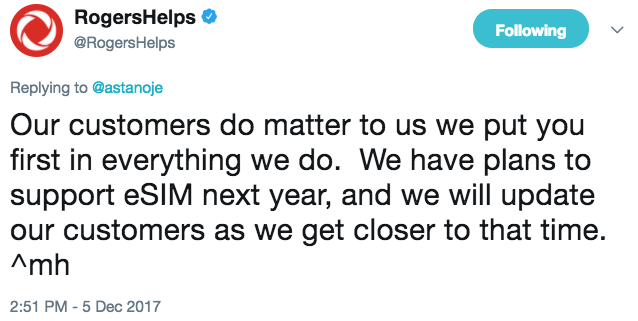 In another tweet, Rogers says “Carrying the LTE Apple watch will be something we look at next year as we build system functionality to support this technology base on open standards.”

In the meantime, the wireless carrier is informing customers their Series 3 LTE models still will work with Rogers, as long as you have it paired to your iPhone, saying “Please know that you can buy Apple Watch Series 3, both the cellular and non-cellular version and bring it to Rogers. You’ll be able to pair with a compatible iPhone using Bluetooth or Wi-Fi.”

Sounds like Rogers is being more transparent about its plans to support Apple Watch Series 3 cellular models in 2018. Any discussions with Apple to bring the smartwatch to the network would be under wraps, so mentioning eSIM support is a major hint at what to expect next year.

What’s unknown, is whether the price will be $5/month like Bell, or $10/month like Telus (but includes 1GB of data).

Are you waiting for Rogers to support LTE for Apple Watch?