If you have been reading Rogers digital magazines from your local library, you won’t be anytime soon as the catalogue has been removed, according to The Globe and Mail.

The issue stems from industry trade group Magazines Canada, which has asked its Canadian publishers to pull out of an agreement with Zinio, the popular app that makes the magazines available, due to delivery problems—Rogers Media complied to the request.

“The association recommended that its members withdraw from the program due to software technical issues that meant digital magazines were not being delivered in a way that is consistent with content delivery expectations and restrictions,”

“Magazines Canada is working with the software supplier and will review this program in the near future,” he said. “We regret any inconvenience this may have caused library patrons.”

Rogers says the decision to pull its magazines was not their theirs alone, and referred inquiries to Magazines Canada instead. I wonder why the groups wouldn’t just try to fix the software and technical issues instead of just pulling them out of libraries?

Some would argue because Rogers Next Issue launched last month, its own all-you-can read digital magazine subscription on the iPad, which offers its digital catalogue for $9.99 per month. 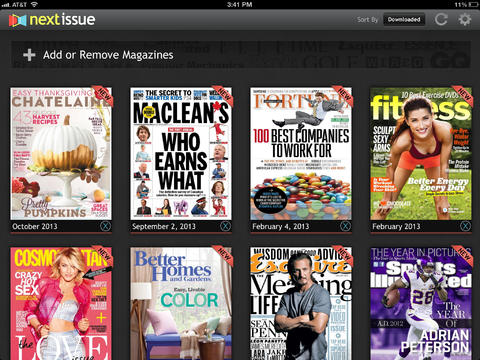 So as of now, the only way to get Rogers digital magazines for iOS users is to go through the Next Issue app, as they are no longer available for free at your local library. Let us know if these changes affect you!