Rogers Kills IPTV Plans to Go with Comcast, Will Take Up to $525M Hit

Rogers has announced it has killed development of its own IPTV solution, to opt for a turn-key solution from Comcast instead. The result of this change means Rogers will take a write down in the range of $475 million to $525 million in its fourth quarter, ending December 31, 2016:

Rogers decided to move to a hosted platform to ensure it has access to the scale and technical roadmap needed to meet the ongoing pace of IPTV innovation. In addition, Rogers customers will benefit from the substantial research and development investments Comcast has made to date and the company’s continuing commitment to innovation. 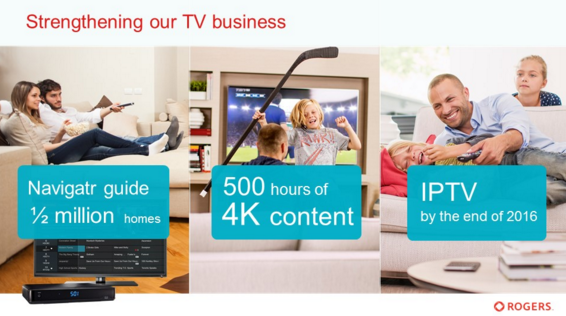 Rogers started developing its own IPTV platform five years ago when no turn-key solutions were available. The company showed investors a prototype in July and said the launch would take place in 2016, but as the technology continues to evolve quickly, using Comcast’s X1 platform, which is also IPTV-based.

Other cable providers such as Shaw and Cogeco ditched their own IPTV developments as well in years’ past, with the former now also using Comcast’s X1 platform. Rogers rival Bell already has IPTV and is the largest TV provider in Canada.

Desjardins analyst Maher Yaghi, according to the Financial Post, said the decision by Rogers to switch to Comcast is “slightly negative.” He added “the decision to go with the X1 platform is actually a better solution for the long term given that the costs to not just develop but maintain and upgrade the system should now be spread over multiple users rather than being borne by Rogers alone if it had launched a proprietary IPTV product.”

Rogers and Shaw recently ditched their online streaming service, shomi, which had a write down of $140 million.

The head of the CRTC criticized Rogers for shuttering the service prematurely, saying “I have to wonder if they are too used to receiving rents from subscribers every month in a protected ecosystem, rather than rolling up their sleeves in order to build a business without regulatory intervention and protection.”

The flanker brands of the ‘Big 3’, Fido, Koodo and Virgin Plus have announced Cyber Monday deals for 2022. These are an extension of Black Friday deals, particularly the current free iPhone 11 with $45/50GB promotion. Koodo is offering up the iPhone 11 for $0/month on a 24 month Tab, to go with the $45/50GB […]
IIC Deals
16 hours ago