After Fido launched some migration plans targeted at Chatr customers only, the $50/4GB plan from the latter has made its way to Rogers customers through the retentions department.

Here’s what you get with this BYOD plan: 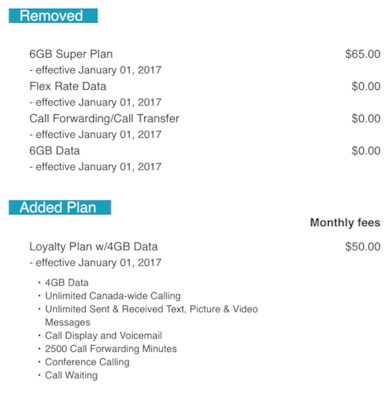 As you can see in the screenshot above, some are switching to this plan away from a 6GB plan to save $15 per month.

According to RFD, since it’s a retention plan you need to call in and ask for the retentions department to acquire it. As this appears to be a relatively new offering, numerous front line customer service agents are unaware, so if this is the case, ask to speak to a manager.

If you are successful in obtaining this plan, you can also request to have it kick in at your next billing cycle to save on pro rated charges. Some were also able to successfully transfer over their $5/month iPhone Value Pack, which includes Visual Voicemail.

Update: This plan is not eligible for Roam Like Home, which expanded beyond Share Everything Plans recently.

Many Rogers customers expressed on RFD it’s “too bad” Rogers didn’t offer them anything like this during Public Mobile’s $38/4GB plan frenzy, as they ended up switching over to the latter.

Let us know if you’re able to get this retention plan—it’s a decent one!