A new change is coming for Rogers prepaid customers, as according to The Star, balances above $150 will be removed by December 31, 2018, if unused. That means if you’ve been carrying over a balance, if you leave more than $150 on your account by year-end, it will no longer be available.

Rogers notified customers about the change via text message to prepaid Rogers and Fido customers, saying “Starting at the end of 2018, our prepaid services will have a maximum allowed balance of $150. Any balance over $150 will no longer be available as of end 2018.” 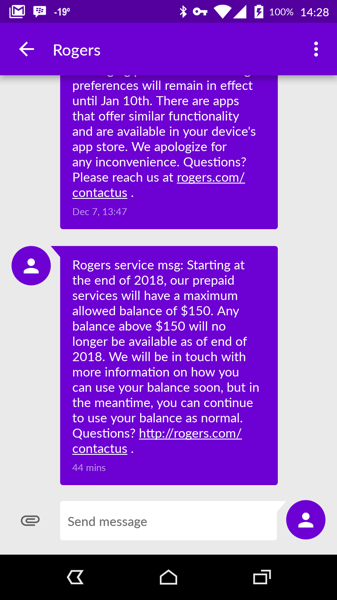 Two Rogers prepaid customers who spoke with Ellen Roseman from The Star, voiced their disappointment with this new policy.

Joanne Maley contacted the reporter after saying Rogers wouldn’t help her or take her concerns seriously. “The hold times are wasteful,” said Maley, who fears loss of a $500 balance. “I will not use up my balance on calls that I would not ordinarily make. And I cannot imagine why I would buy a new product from Rogers, whom I no longer trust.”

Rogers’ existing prepaid wireless policy requires customers to add $100 annually to their accounts, with balances carried over from previous years.

Frank Roelofsen, who has a prepaid balance of $850, said “I cannot see that simply erasing the unused value in my account, accumulated over the past 10 years in full compliance with Rogers’ own rules, is a legitimate business practice.” He said his prepaid phone is only used for emergencies, which is why he has accumulated the large balance.

According to Rogers spokesperson Samantha Grant, she told The Star “Over the next year, we will be in touch with impacted customers to help them use any balance that’s above the cap in a way that’s right for them.”

Of course, after being contacted by The Star, Rogers assured Roelofsen his balance would not be removed, adding he could transfer the balance to a postpaid plan. As for Maley, she negotiated for a week with Rogers and was asked not to share her results with The Star, but she apparently was provided options to transfer her prepaid balance to other services such as cable TV.

As far back as three weeks ago, Rogers customers started to receive text messages about the prepaid changes. The Rogers Community Forums has a discussion thread which spans 12 pages, with customers angry and frustrated about the change.

What do you think? Should prepaid balances above $150 just ‘disappear’ if it remains unused?