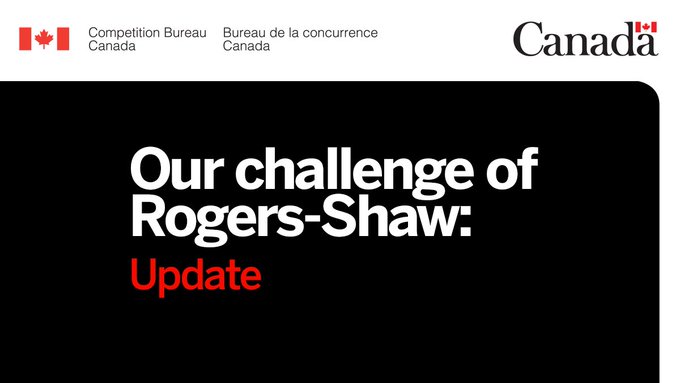 The Competition Bureau announced on Monday both Rogers and Shaw have agreed to a preliminary injunction that stops them from closing their deal, until a decision has been made by the Competition Tribunal.

Earlier this month, the Competition Bureau filed an application with the Tribunal to block the Rogers-Shaw deal through a court injunction. The Bureau will be proving its case to the Tribunal to stop the merger from proceeding.

Rogers and Shaw have agreed to the Competition Bureau’s request for an expedited hearing process in front of the Tribunal.

“Vigorous competition is essential for Canadians to access affordable, high quality wireless services. I’m pleased this case can now move quickly towards a hearing before the tribunal. Our objective remains to protect Canadians by preserving competition and choice in Canada’s wireless market,” said Matthew Boswell, Commissioner of Competition.

The Bureau believes the $26 billion Rogers-Shaw merger will result in higher prices and less competition when it comes to wireless services. The deal would remove Freedom Mobile as a fourth player and retain Canada’s wireless market to be held in control by three major players, primarily Rogers, Telus and Bell with roughly 87% of subscribers in Canada.

“Rogers and Shaw strongly believe the Transaction is in the best interests of Canadian consumers, businesses and the Canadian economy, and that a settlement is the best path forward in ensuring that the benefits of the Transaction are fully and expeditiously realized,” said Shaw and Rogers in a statement.

“If a Tribunal hearing is ultimately required to address the Commissioner’s application to prevent the Transaction, Rogers and Shaw intend to oppose it. An expedited schedule of that application is expected to be set soon,” said both companies on Monday afternoon.