At first I thought my iPhone was acting up. But after experiencing multiple dropped calls, intermittent cutting in and out when dialling, and confirmation via twitter (people exploding over this issue), I can finally say Rogers/Fido is experiencing some major network issues!

Here is a sampling of some tweets I’ve received:

Take a look at this real-time search on twitter for “rogers fail”: 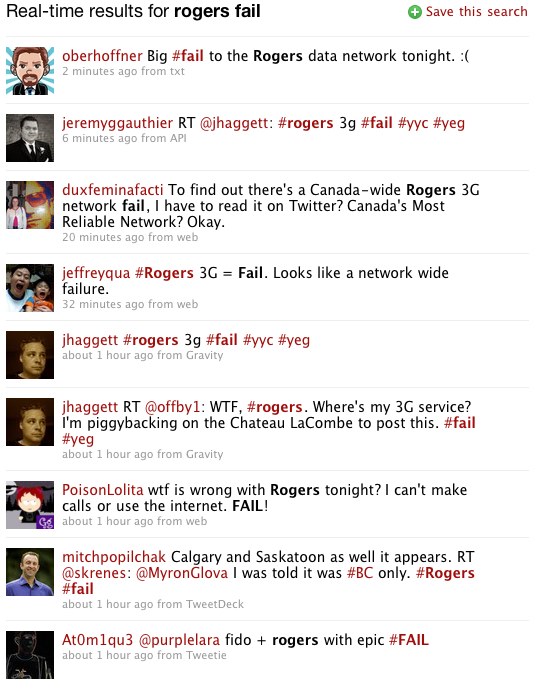 It’s not looking pretty. Not sure what is up, but Rene Ritchie says it could be due to “dummy” Bell/Telus HSPA+ towers? Either way, right now the situation is not looking pretty. Rogers is trying to the most reliable network, and for the most part I haven’t had any problems in Vancouver. But the situation right now is extremely painful for those who are relying on Rogers for voice and data service.

YOU can be a part of the solution–contact Rogers!

Rogers is touting their “Social Media” Team via twitter. I highly suggest you send them a message regarding this network issue:

Rogers has received the following “F” rating from the Better Busines Bureau (BBB) in regards to complaints:

The BBB in Burnaby, B.C., has received 581 consumer complaints about Rogers Communications in the last three years. It has given Rogers an “F” rating for failing to resolve many of those complaints to the customer’s satisfaction.

Rogers also has an “F” rating at the BBB’s Toronto and North York locations, where 1,045 complaints were logged in the same period. Approximately half of those complaints were about billing.

People are livid within the almost 800 comments within this CBC article in regards to Rogers and their dealings with customers.

Rogers, please fix this network issue or at least update us on what’s going on. Thank you, on behalf of Canada.

Have you had any Rogers/Fido network issues today? Where are you located?