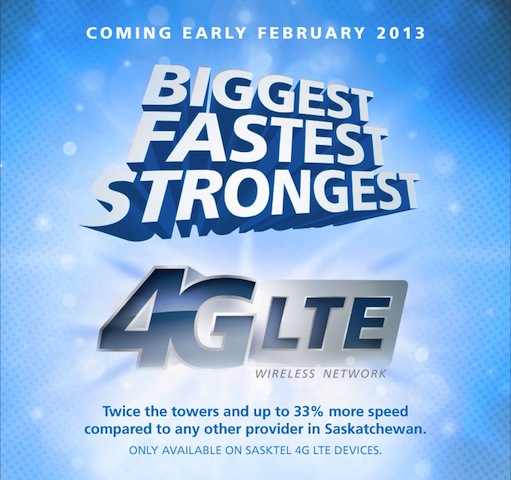 SaskTel has announced today they have deployed technical trials of their upcoming 4G LTE wireless network. Commercial availability will launch in Regina, Saskatoon and surrounding communities in early February 2013. SaskTel claims it will have the largest 4G LTE network at launch compared to any other provider. Throughout next year, the network will extend to Estevan, Moose Jaw, North Battleford, Prince Albert, Swift Current, Weyburn and Yorkton.

“When we launch 4G LTE, it will be significantly faster than the competing LTE network in Saskatchewan and at the time of introduction it will have more than double the towers with that coverage advantage growing throughout 2013,” said Ron Styles, SaskTel President and CEO. “And only 4G LTE capable devices purchased from SaskTel or its authorized dealers will operate on the 4G LTE portion of the SaskTel network.”

SaskTel currently offers the iPhone 5, which currently is limited in data speeds due to their 4G HSPA+ network–but the 4G LTE launch in 2013 will change that.

Styles noted the future expansion of their 4G LTE network will be determined by how successful they are in the upcoming 700 Mhz spectrum auction being held by Ottawa in 2013.