Last year the CRTC announced new rules for cable and satellite companies to offer a $25 “skinny” TV package to consumers, along with pick and pay options for channels. The deadline to implement these are set for March 1, 2016, and now Shaw has revealed their package ahead of that date.

As you can see below the Shaw Limited TV package costs $25 per month and includes 40 channels (HD equipment not included). Here we see Canadian channels such as CBC, City, CTV, Global, while American channels include the likes of ABC, CBS, ABC and NBC. 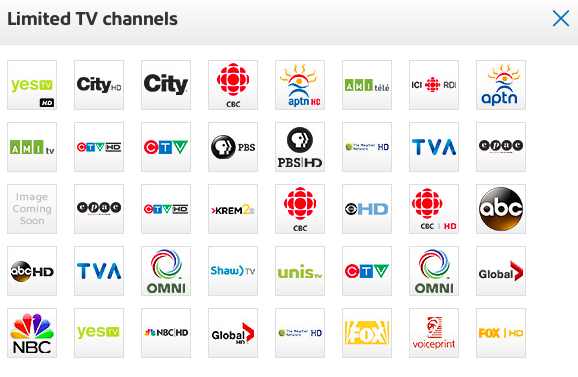 The CRTC issued a memo today to remind companies of the upcoming March 1 deadline for implementing $25 basic packages, plus pick-and-pay options or small pre-assembled packages.

Regulations were amended to require cable and satellite companies to offer Canadian and non-Canadian programming services within the following dates:

CRTC Chairman Jean-Pierre Blais told The Canadian Press the lack of updates from major companies such as Bell, TELUS and Rogers so close to the deadline “was a shot across the bow.” However, Blais believes bad faith is not the reason for the delay, but rather a wait-and-see approach to what competitors will offer.

Bell customer service reps have noted a February 21 date to release their basic TV package, while Rogers told The Canadian Press their offering will be announced before the March deadline.

Speaking at the Canadian Club today in Toronto, Blais gave a speech which said companies should try to offer better service for customers given these new regulations, calling it “their moment to shine”:

Cable and satellite companies should not view this change as an opportunity to replace business practices designed to maximize profits from captive customers with newer forms of anti-consumer behaviour. Instead, I urge them to make the products they sell even better for Canadians, and put viewers—their customers—back in control of their televisions.

Shaw recently launched FreeRange TV for iOS and Android, which lets customers watch live TV on the go. This app, coupled with the basic $25 package and Netflix, could bring you the best of both worlds to consume media away from your TV.