PC Mag Crowns Telus as the Fastest Canadian ISP for 2021

For the second consecutive year, Telus has been named Canada’s fastest major internet service provider by PC Mag. While all the major players saw significant boosts in speed in 2021, Telus managed to expand the gap between itself and the competition by a big margin. 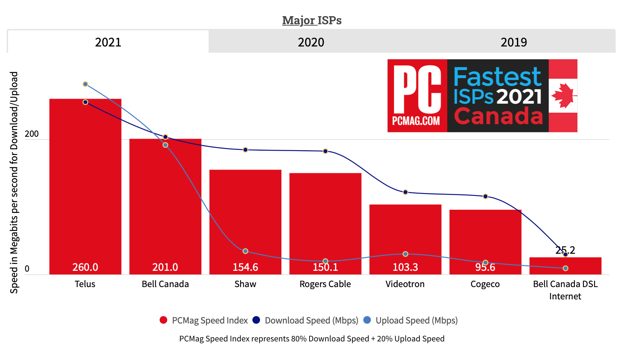 According to the Canadian Internet Factbook 2020, 90% of Canadians have broadband at home, and 81% are satisfied with what they get. They value it so much, that 71% said they wouldn’t buy a house in a market that doesn’t offer high-speed internet.

Although Rogers has remained the leader for many years in the past, it was overtaken by Bell Canada and its Bell Aliant affiliate after they introduced fibre-to-the-home. And last year, Vancouver-based Telus stepped up its game to take the top spot.

“Telus does a lot more than home internet, of course, such as offering Telus Mobility for smartphone users. But looking at its internet at home, the firm launched out of the gate with a 260.0 PCMag Speed Index (PSI)—calculated by taking 80% of the download speed and 20% of the upload speed collected from our PCMag Speed Tests, and adding those numbers together.

This put it at the top of our list for the country’s “major ISPs”—meaning any ISP with a multi-province reach and at least 500,000 subscribers.”

Below is a list of the top ISPs in each of the Canadian provinces: