Telus has just announced a $10 million investment to bring 5G connectivity and broadband internet to Haida Gwaii. The carrier has recently upgraded Mascon to a high-speed network that now provides access to speeds up to 120 Mbps in Daajing Giids and Skidegate.

These investments build upon Telus’ Reconciliation Commitment and are critical to providing Indigenous Peoples with access to superior technology that connects them to the people, resources, and information that make their lives better.

“Our longstanding investments on Haida Gwaii are supporting critical, transformational change in respect to enabling online healthcare, education, and the ability to work from home or operate a local business and compete globally,” said Telus EVP Tony Geheran.

“When the pandemic hit we knew we needed to ensure our Elders were protected. When we approached Telus and Mascon by Telus, early in the pandemic they listened and worked with us as members of our community to support our iPads for Elders program, including enabling connectivity to 35 Indigenous and non-Indigenous Elders,” said Jisgang Nika Collison, Executive Director & Chief Curator of the Haida Gwaii Museum.

In May, Telus announced an investment of $17.5 billion in network infrastructure, operations, and spectrum across British Columbia over the next four years and committed to investing $70 billion overall across Canada by 2026. 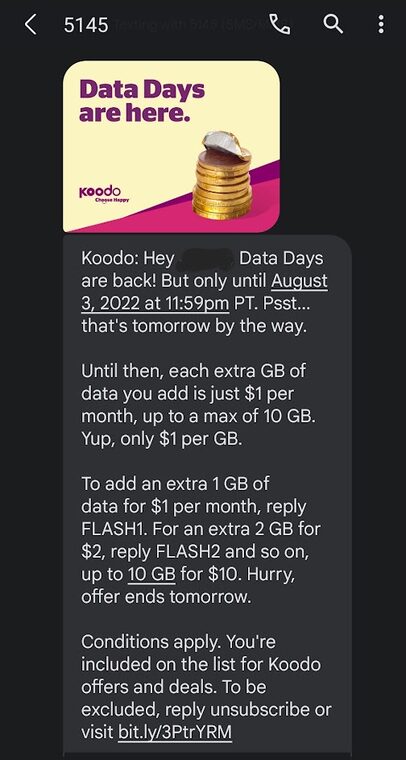 Image via RFD user ‘jshmeek' Telus-owned Koodo has brought back its ‘Data Days’ promotion for select customers, offering them the opportunity to purchase data add-ons at the price of $1 per 1GB, for up to 10GB per month. Previous ‘Data Days’ promotions for customers offered limited data amounts such as 1GB, 2GB or 10GB, but...
Gary Ng
6 days ago

The latest back-to-school 2022 offer from Telus-owned Koodo for customers in Quebec is in the form of a $45/15GB plan for bring your own phone. This $45/15GB plan offers 4G speed data, unlimited Canada-wide minutes and international messaging, Call Display, Voicemail, Call Waiting and Conference Calling, and extra data at $13/100MB ($130/1GB). Normally, this plan...
Gary Ng
1 week ago