The latest April 2020 State of Mobile Networks report by Tutela for wireless networks in Canada has ranked Telus as the top carrier, beating out its rivals Bell and Rogers.

Tutela’s annual report examined results from “over 3.9 billion records in Common Coverage Areas across Canada, collected between September 1, 2019 and February 29, 2020.” 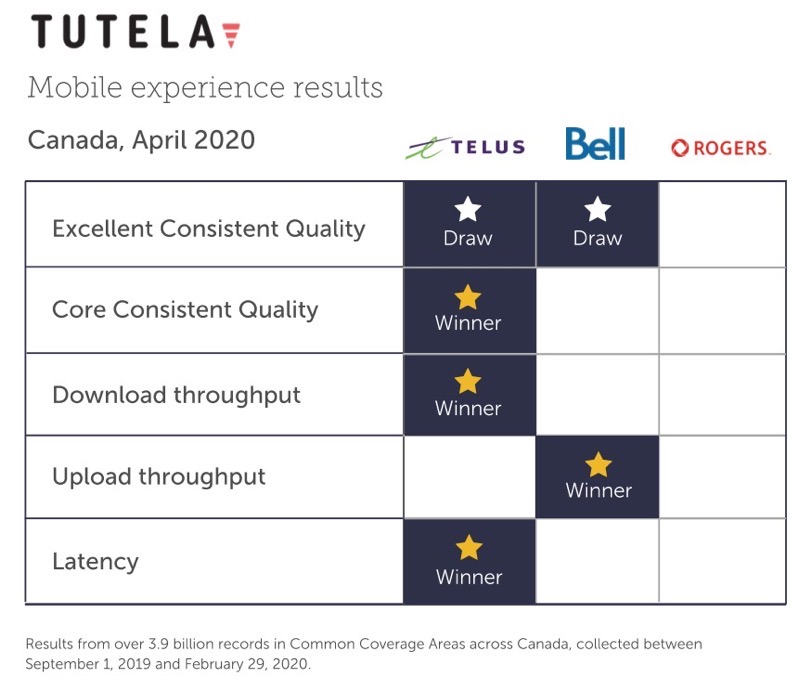 Looking at the Tutela report and the breakdown of tests in various cities in Canada, you’ll notice a trend of Telus and Bell basically neck and neck, and Rogers in third place (or fourth in some instances where Freedom Mobile or Videotron are available).

“As Canadians continue to rely on our infrastructure, now more than ever, this recognition from Tutela, and acknowledgment from Opensignal, in terms of the strength, speed and quality of our wireless network, is particularly meaningful,” touted Darren Entwistle, President and CEO, Telus, in an issued statement.

During the COVID-19 pandemic, Telus says its wireless and wireless usage has “spiked considerably” as Canadians remain at home to stay connected. The company says it continues to maintain capacities to accommodate the surge in network demand.

In 2019, Telus took home national awards from Opensignal, Ookla, J.D. Power, PCMag, and Tutela, placing first in four out of five major mobile network reporting tests it says, for the third consecutive year in a row or more.