Hey everyone, welcome to Day 8 of our $2000 Blog Anniversary Contest! Seems like everyone was eager for the results of our Day 7 Richard Solo Battery Backup Giveaway. Well, the winners will be announced at the end of this post. Before we do that, let’s see what Day 8 has to offer!

Today’s giveaway is sponsored by one of my favorite Canadian websites of all time: RedFlagDeals.com! Have you ever come across a “hot deal”? Well, if you love bargains you MUST keep your tabs on the Hot Deals Forum over at RedFlagDeals.com. This is where the hottest deals can be found on anything being sold in Canada. You will find some of the best deals here. You’ll end up spending money on things you won’t need–it’s the so called “RFD effect!”

Our friends from RFD and PriceCanada.com have sponsored the following: 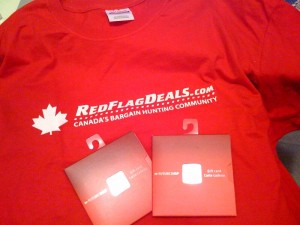 RFD (M/L/XL) Tshirt for (your name) because…

$50 Future Shop Gift Card for (your name) because…

3. That’s it! Be creative! Have fun with it! Compelling entries that follow the instructions have greater chances of winning instead of comments like “I’m in.”

4. Just a friendly reminder. I’m just over 200 Twitter followers away from breaking 1000 followers! Once that happens, the Sony Portable DVD Player ($250 value) and $100CDN towards your charity contest will come into effect! So spread the word and sign up on Twitter!

Retweet this reminder to your friends:

This contest received about 80 entries, but some of them did not include a number, which sort of makes it hard to win. Seems like a few of you just increased the odds for the others! 😉

Anyways, the idea was for me to pick a number between 1-1000, and the people who guessed the closest or got the number would win. In the event of more than two people guessing the same number, I’d put those into a hat and draw two for the win.

Here is the number I picked on Sunday when I originally wrote the Day 7 contest: 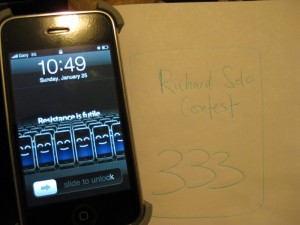 Three people picked 333 spot on (go buy a lottery ticket!), so I put their names into a hat. The two names that emerged were:

So congrats to you both! Thanks to everyone who entered!

PS – Day 1 winners: the invisibleSHIELDS arrived. I will be shipping them out shortly!