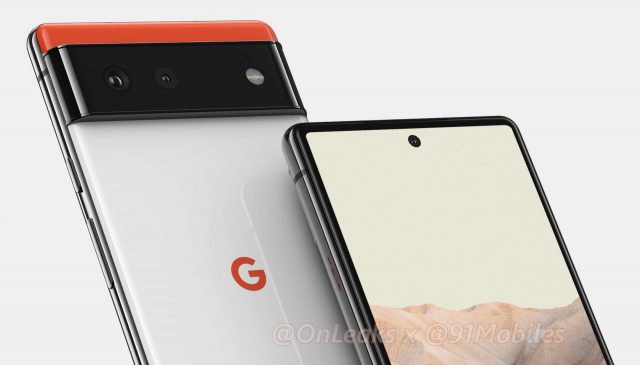 New Google Pixel 6 renders have surfaced and have given us an in-depth look at the device’s design and key features. The renders show off the Pixel 6’s display, as well as the dual-camera array on the rear side of the device.

The renders themselves come by way of tipster OnLeaks as well as 91Mobiles. The images give off a well-rounded look at what we could expect Google’s next flagship Pixel phone to look like.

When looking at the front of the device, the Pixel 6 render shows a hole-punch camera located at the top of the display center. It’s said that the Pixel 6 will have a 6.4-inch flat display with a minimal bezel surrounding the display. Additionally, it’s being reported that Google’s new device will also have an in-display fingerprint scanner.

Moving onto the back of the Pixel 6, the renders show that Google has set the camera array on an elevated panel with a dual-tone finish. The Pixel 6 appears to have a dual-camera set up with the two lenses in a horizontal layout. OnLeaks has also said that a third “small and unknown” sensor is also included in the array.

Ather notable piece of information to take away from this leak is that the Pixel 6 is reportedly 158.6mm x 74.8mm x 8.9mm. The device is also said to have a USB-C charging port. Finally, the Pixel 6 has a splash of colour in that the small “G” logo is a bright orange, which matches a panel located above the cameras. This contrasts with the device’s overall glossy white finish.

There’s still no word on when Google plans to announce or release the Pixel 6. However, as history has dictated, it’s likely that a release will be solidified for the fall season.