Apple has released iOS 6.0.2, an update that “fixes a bug that could impact Wi-Fi,” as first noted by The Loop.

iOS users have been plagued by a recent bug which causes data to be used over Wi-Fi. We’ve covered this issue extensively, which was determined to impact Apple’s Podcast app, but apparently was fixed with iOS 6.0.1. Some users have still suffered from data overages due to this, so this update could pretty much fix it for good.

Let us know if it works for you!

Update: updating over the air seems to result in an error for many; looks like we’ll have to plug in with the cable. It has worked for some though (thanks @pulp45): 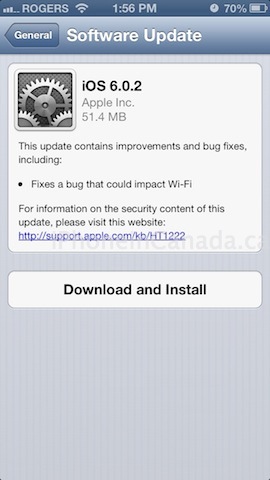 …more to come, refresh for updates