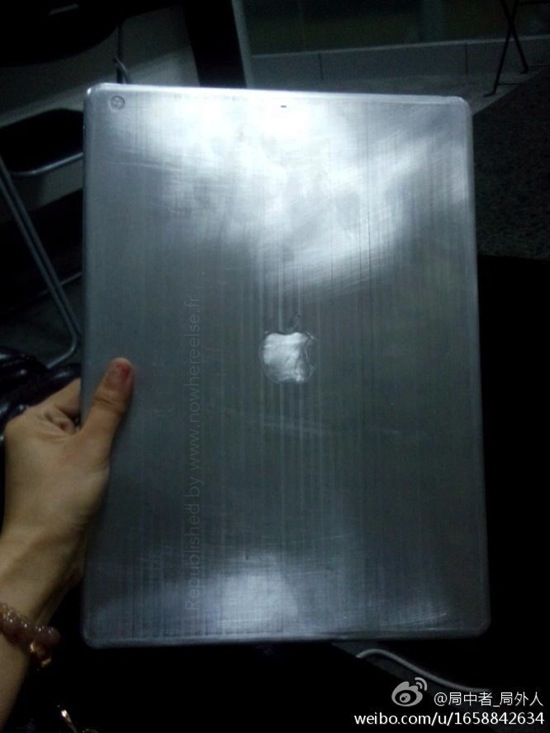 While rumours of a larger ‘iPad Pro’ have been swirling on the internet for a while, it’s the first time that a physical evidence of the alleged device has been leaked on the web. The picture, which has been shared by French blog Nowhereelse.fr, shows an aluminium backplate of a purported ‘iPad Pro’ prototype, that sports an approximately 12.9-inch diagonal display.

[Machine Translation] “Intended to serve as a reference for molding shells protections and other cases, this specimen was machined from a block of aluminum is expected to unveil the first time the size of the iPad Pro.

Held in one hand by the author of this photo, the gigantic tablet appears excessively if not ridiculously large . So much so that it is natural to call into question the reliability of the data on which this model was designed.”

I personally don’t think the part belongs to an actual iPad prototype. Instead, it could just be a physical mockup made out of aluminum. In addition to the relative size of the device, the image does not reveal much, except for a cutout for the rear camera at the top-left corner, which is pretty much a standard with all current generation iPads.

Last year, it was reported by The Wall Street Journal that Apple may be testing iPads with significantly larger displays, which was reiterated by Ming-Chi Kuo even though he added that a bigger iPad is unlikely to come out this year.