American Airlines is the first U.S. airline to receive FAA approval to use iPads Electronic Flight Bag (EFB) as a replacement for almost all manuals and maps pilots need to have on board. 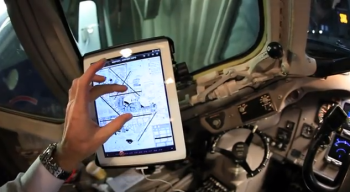 The AOL travel website Gadling has recently published a video (via iDevice) detailing what this really means for these pilots. As you will see in the video below, by adopting the iPad Electronic Flight Bad pilots can leave three to four manuals at home weighing about ten pounds.

Yet the innovation has its own drawback: Each pilot will indeed have an iPad of his or her own, but it needs to be equipped with a long-life battery to keep the iPad on for 24 hours.

And because both pilots need to carry backup batteries, the FAA feels this move is as redundant as paper manuals.

So far American has approval for the 777, 737, MD-80 and is just awaiting approval for the 757/767 fleet. Hopefully, this will be just in time for my return to that airplane, as once you use this setup, you won’t want to go back to the paper.

“To get that approval, American had to have the iPad tested in a hypobaric chamber to simulate how the device would handle during a rapid decompression. They also had to arrange for mount testing with the FAA, which is ironic since our manuals weigh far more than the iPad and aren’t secured in place. Many takeoffs have resulted in a book or two sliding off the side table and onto the floor.”