Before the iPad mini hit the stores, analysts were talking about an iPad sales cannibalization rate up to 20% (wild guesses even went as far as 50%). Now that the first couple million iPad mini units have reached their users, and the reviews are in, Cowen and Co. have surveyed US adults to see how the iPad mini is affecting its bigger brother’s sales, AllThingsD reports.

Out of the 1,225 US citizens surveyed, only 16.6% responded affirmatively when asked if the iPad mini would replace another device. Now, here is where the picture gets interesting: of those who intend to replace their device with the iPad mini, 29% will replace the iPad, and only 13% will replace a Kindle Fire with Apple’s smaller tablet. The result is sour for Windows, as 42% of Windows PC users are ready to replace their PC with and iPad mini. 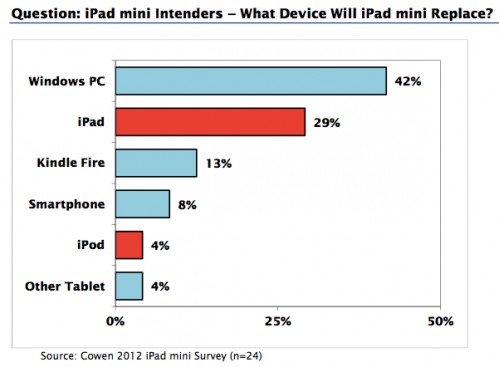 We have to note, however, to appreciate the full picture of the survey’s result, that 52% of those surveyed had never owned a tablet before, and only 12% of them intended to buy an iPad mini within the next 18 months.

“The iPad mini creates more demand than it cannibalizes,” Cowen analyst Matthew Hoffman explained. “Since 52 percent of the mini intenders in our sample did not own a tablet of any type, we see it successfully positioned as likely to penetrate new entry-tier segments. … Mini will no doubt take some iPad “4? sales, but its low price also looks like an important tool to capture new consumers’ attention.”

What about you? Does the iPad mini replace any device you have used before?