New tech startup Tactus’s first consumer product Phorm is a shape-shifting iPad mini case that brings a tactile experience back to your iPad’s software keyboard, by generating physical keys out of thin air.

According to TechCrunch, The company’s innovation uses a microfluidic panel to achieve its magic, routing liquid through invisible channels to expand specific areas of the top layer of a touch panel, producing protrusions and bumps where previously there were none. 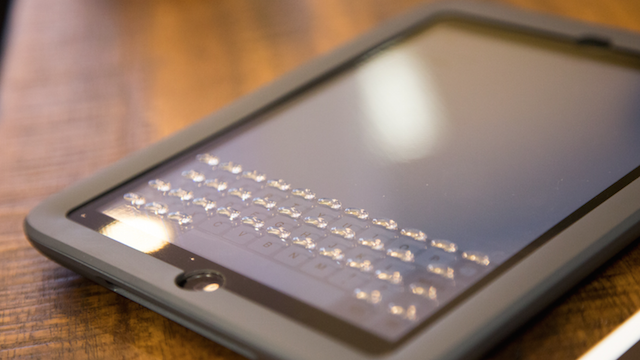 Dr. Craig Ciesla and Dr. Micah Yairi, the company’s co-founders have been working on technology that can generate physical keys from a flat surface on demand. Phorm is their first product ready for the consumer market, and it’s available for pre-order now, with a target launch date of summer 2015.

The iPad mini case incorporates Tactus’ tech into a thin front panel, similar both in size and in method of application to a standard screen protector. It’s paper-thin, and it offers virtually no change in the optics of your display when you look at an iPad inside the Phorm.

“The Phorm case itself holds the fluids needed for the transformation it enables, as well as the circuitry required for triggering the key generation. There’s a single large switch on the back that lets you turn the tactile keys on and off, and the case’s industrial design was handled by Ammunition, the same firm that originally worked with Beats on its hardware pre-Apple acquisition.

Style is great, but Phorm’s killer feature are those keys that rise up from nothing. These aren’t mechanical keys, of course: They’re essentially touch-capable ridges that suggest the location of the device’s keyboard (in portrait orientation) and have a little bit of give on finger press. But they provide a lot more presence than a flat display for typing by touch alone, and of course they disappear completely when not in use”.

The retail price of the Phorm will be $149 once it becomes widely available, but pre-order customers can grab it at the launch price to $99.

Meanwhile, check out the following video for a better idea: