iPhoneinCanada.ca has been hearing numerous reports about the availability of factory unlocked iPhone 5 units at Apple Stores on launch day over the past few days. According to multiple sources, Apple Canada has decided to no longer offer factory unlocked units for sale on launch day, Friday, September 21st. 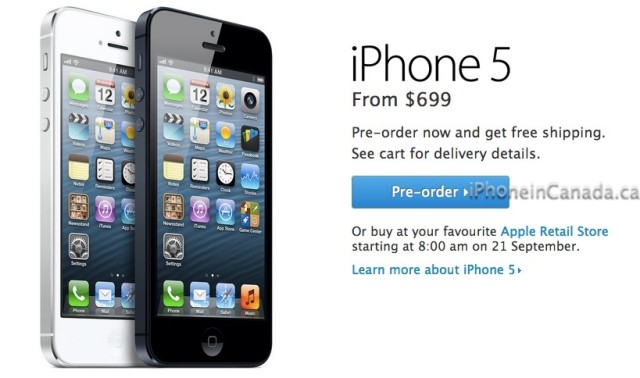 The reasoning for reversing this policy, that has been in effect since the iPhone 4? According to our source, Apple makes more money on a contract phone than outright unlocked purchases as they receive residual revenue from monthly carrier fees:

“Due to Apple’s renewed focus on in-store iPhone contracts, unlocked iPhones will be unavailable at launch at Canada Apple Stores”

This information is not available to current employees on the retail floor, so calling an Apple Store to inquire about this will result in being told unlocked iPhone 5 units will be available next week.

Apple Canada wants their staff to focus on signing and renewing carrier customers. Some employees feel they are doing the same job as carrier employees–but without the commission benefit.

A separate source emailed an Apple Store in a large Canadian city about unlocked iPhone 5 units on launch day and was told the following:

Thanks for your email. As it appears now, the only way to purchase an unlocked phone on launch day will be online. Only contract iPhone 5 phones will be sold in store. We are continuously monitoring our website for any changes.

Other Apple Store location employees have mentioned to us about this upcoming change that could result in a negative situation for those intending to wait in line overnight prior to next week’s iPhone 5 launch. Imagine waiting in line overnight only to be told–unlocked iPhone 5s are unavailable for purchase.

Apple retail locations have currently been in the spotlight over employee dissatisfaction, reportedly a direct result of policies implemented by SVP of Apple Retail, John Browett.

When we asked our reliable source if unlocked iPhone 5 units would be sold later on–the answer was unknown, and we were told it was best to order online. Currently, the ship times for online orders have hit two weeks after a busy initial pre-order period last night in the early morning.

So, there you have it folks. If you plan on lining up for an unlocked iPhone 5 next week at an Apple Store…you might be out of luck. It doesn’t make any sense, but it appears to be true at this point in time.

Update: Our source has just confirmed this new change in policy has been confirmed, and information has been passed down to all employees. Unlocked iPhone 5 units are now only available online.

My guess, is this is a way to slow down the proliferation of factory unlocked iPhone scalpers.

Update 2: Apple’s website all but double confirms what we did not want to hear. Check out this paragraph below, found on this page (thanks Dave):

Update 3: Looks like Apple has changed the text on its website, leading some to believe unlocked units will be available in-stores on Friday–you be the judge (thanks all for sending this in!):

Update 4: Nellie González from the Apple Online store executive relations called iPhoneinCanada.ca and confirmed unlocked iPhone 5 will not be available in retail stores tomorrow. She says if the policy changes in the future they will let customers know. Apple would not comment on why the change was made.

So there you have it. Tell your friends and family they won’t be able to buy unlocked in stores if they plan on lining up.