After seeing the unboxing video of the new 2013 MacBook Air, how does this new model fare in benchmarks? Primate Labs posted their results early this morning and determined modest improvements in the range of 3-8% thanks to Intel’s new Haswell processors (compared to 20-25% jumps in last year’s models). But there’s more to this minor bump below the surface, as these power consumption has been reduced significantly, which has resulted in extended battery life for these MacBook Airs.

John Poole, founder of Primate Labs had this to say:

The new MacBook Airs use Intel’s new Haswell processors. With Haswell, Intel’s focus was on reducing power usage. Rather than improve performance by 25%, Intel improved performance by 10% while consuming 25% less power. 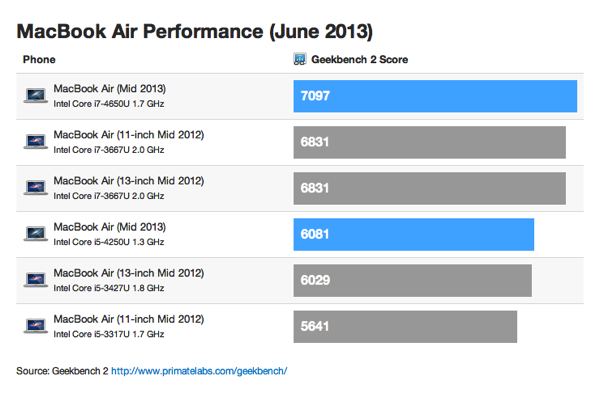 Engadget did their own benchmarks using the Blackmagic Disk Speed Test and came up with blistering read speeds, more than double that of the current 15-inch Retina MacBook Pro:

There’s definitely some good news on the Blackmagic Disk Speed Test front. We clocked 433.4 MB/s on the write speed for the test — an excellent number, though not unheard of. Better yet is the read speed — the plucky little ultraportable got a 725.4 MB/s. That is, indeed, almost twice the speed of the current 15-inch MacBook Pro with Retina.

The site did note their Geekbench and Xbench numbers did dip a bit, but could be related to the fact the software was not up to speed for Apple’s new MacBook Air hardware. Either way, Haswell processors are looking like a pretty killer combination for the 2013 MacBook Air. We can only imagine what performance will be once OS X Mavericks becomes available.

Anyone going to jump on a new MacBook Air? You might want to wait for the Back to School promo to kick in, which should come shortly.