According to Bloomberg, Apple is looking at possibly switching away from Intel processors in the future for its Mac line up to instead use its own ARM-based processors found in iOS devices:

Apple Inc. is exploring ways to replace Intel Corp. processors in its Mac personal computers with a version of the chip technology it uses in the iPhone and iPad, according to people familiar with the company’s research.

Apple engineers have grown confident that the chip designs used for its mobile devices will one day be powerful enough to run its desktops and laptops, said three people with knowledge of the work, who asked to remain anonymous because the plans are confidential. Apple began using Intel chips for Macs in 2005. 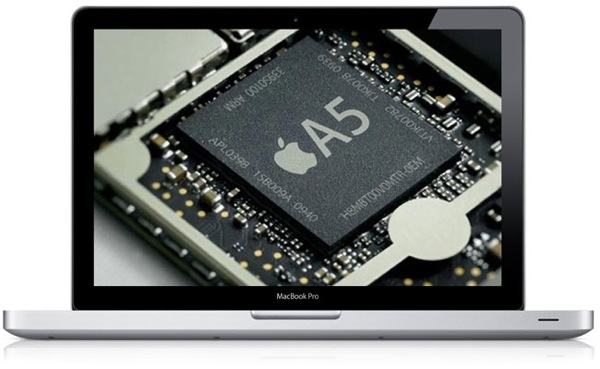 The switch away from Intel is unlikely to happen for another few years, but some engineers say the move is inevitable as features between mobile devices and PCs start to become identical in nature.

Apple’s Bob Mansfield looks to be in charge of making this switch as the new leader of the company’s Technologies division, with one person noting Apple wants to continue making thinner and smaller products while utilizing a single chip for performance.

It is speculated Apple could turn to Taiwan Semiconductor Manufacturing Co (TSMC) to build a future chip based on ARM technology, akin to how Samsung currently produces the A-series SoCs for iOS devices.

Apple’s technologists have grown more concerned in recent years about Intel’s ability to create lower-power chips. The computer maker has brought out thinner, lighter products such as the MacBook Air that have less room for the batteries needed to keep Intel’s powerful chips running all day, according to three people familiar with the relationship.

The article notes these worries came to light in 2011 when Apple was concentrating on making thinner MacBooks with Retina display screens. Intel was unable to persuade Apple executives it could make low power chips; Mansfield and others met frequently with Intel to discuss solutions and it was here Apple told Intel it was looking into implementing its own chips for the Mac line.

Intel did announce it would make lower power chips, notes a source, but Apple concluded that wouldn’t happen until a few years down the road, if any at all.

As we have seen with recent releases in Apple’s product line up, the company is obsessed with making thinner and lighter products with high performance, yet maintaining impressive battery life. If Intel can’t design a low power chip anytime soon, Apple looks to run full steam ahead with its ARM-based chips without them. It would definitely lead to further economies of scale for components, something Apple likes to leverage as we have seen with the iPad mini release.

Back in May of 2011, SemiAccurate published a similar story noting Apple had ditched Intel chips for its Mac line up.

Update 1: CNET got some insight from Nathan Brookwood of Insight 64 and Anand Shimpi of Anandtech to share their thoughts on the aforementioned chip scenario coming to fruition: