Yesterday, we told you the first MacBook Pro with Touch Bar orders in Canada had moved to the “preparing for shipment” phase earlier this week, a sign shipping was imminent.

Now, we finally have reached the “shipped” stage, as we (along with many of you guys!) received a shipping notification from Apple earlier this morning, with an estimated delivery of November 18th: 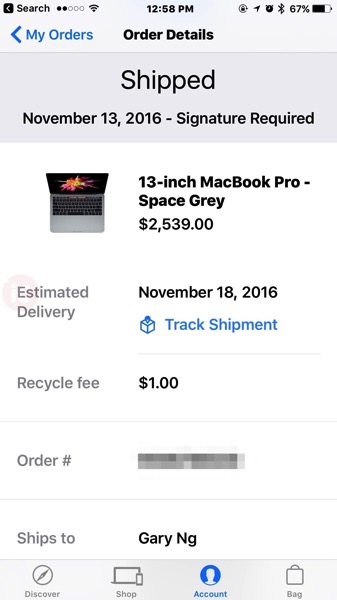 However, actual tracking information says our order (13-inch with 256GB SSD/16GB RAM) will arrive on Wednesday, November 16th, which is two days earlier than the delivery window of November 18-24, a nice surprise.

Has your MacBook Pro with Touch Bar shipped yet? What configuration did you order?