So today is the BIG day! WWDC 2009 is finally here! The rumors have come fast and furious of the past week about what we will be announced by Apple today. The rumor of choice is that Apple will be releasing their third generation iPhone. We are also expecting the release date for iPhone OS 3.0 as well.

John Gruber recently made some WWDC predictions that provides some insight on just what we might have in store today.

He stands behind his previous predictions of…

…only to add more predictions below:

– new hardware code name is “iPhone 3GS”
– battery life will be 15-20% longer than the iPhone 3G
– 3GS form factor to be similar to 3G, but some newer, cool changes to come
– iPhone 3G pricing to fall to $99, iPhone 3GS will be flagship iPhone

My Predictions For Tomorrow’s WWDC Keynote

Phil Schiller will announce the next generation iPhone Video (or whatever it will be called–but a focus will be on video recording). Since this is going to be a next generation iPhone, a faster CPU/RAM, better battery life, and some sort of sexy design will be announced. You know what would be incredible? If Apple utilized the battery technology they are using in their 17″ MacBook Pros in the iPhone!

During the keynote, iPhone OS 3.0’s release date will be officially announced. I’m guessing Apple will say it’s available immediately or will make us wait another week.

It sure it hard to make predictions when it comes to these big media events held by Apple. With so many rumors flying in the past week, it’s impossible to keep up. However, there is something that will make tomorrow much more interesting…read on!

For those who aren’t working today or are at work with internet, you will be able to follow the keynote via various sites that will be live-blogging the WWDC keynote. If you’re super keen you can even play SteveNote Bingo! 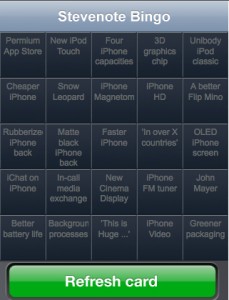 The action starts at 10AM PST! I can’t wait, it’s going to be an awesome day! What are your predictions for today’s WWDC keynote?