2018 Lexus Models Get Apple CarPlay Update in Canada, USA [u]

Last spring, Lexus announced their first vehicle to support Apple CarPlay would be the company’s new 2019 UX crossover coming to Canada and the USA.

Now, it appears Lexus Canada has made 2018 vehicles eligible for an update to get Apple CarPlay, according to a recent change on the company’s website.

A footnote on the Lexus Apple CarPlay page says, “Your Lexus multimedia system is now eligible for an update which includes Apple CarPlay compatibility. Please contact your preferred Dealership for more details.”

The Apple CarPlay update applies to the following 2018 Lexus vehicles: 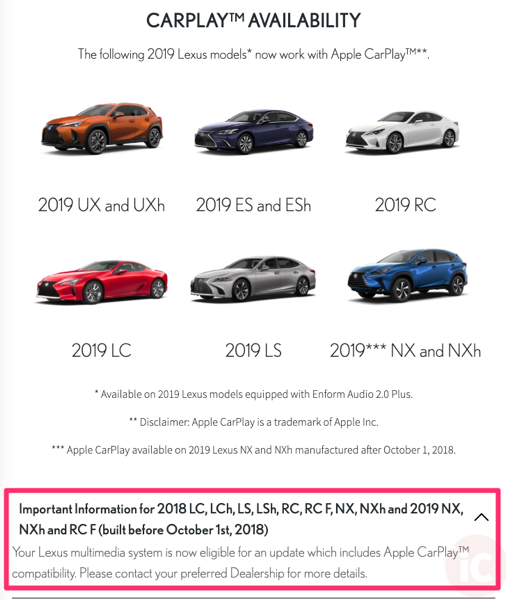 Lexus USA has a support page regarding CarPlay and it is also similarly listing 2018 vehicles as eligible for this Apple software update. Last fall, the company line said they were not bringing CarPlay to 2018 models, but it looks like that is no longer the case.

Apple has not yet updated their website to indicate 2018 Lexus model year vehicles can now support CarPlay, as only 2019 models are listed.

If you have one of these 2018 Lexus vehicles, it’s time to contact your dealership to inquire about your Apple CarPlay update.

Update May 17, 2019: The cost to perform the Apple CarPlay upgrade is $70 in Canada, according to the documentation emailed to iPhone in Canada reader Yvan. Americans will have to pay $199 USD, according to the Lexus website (ouch). 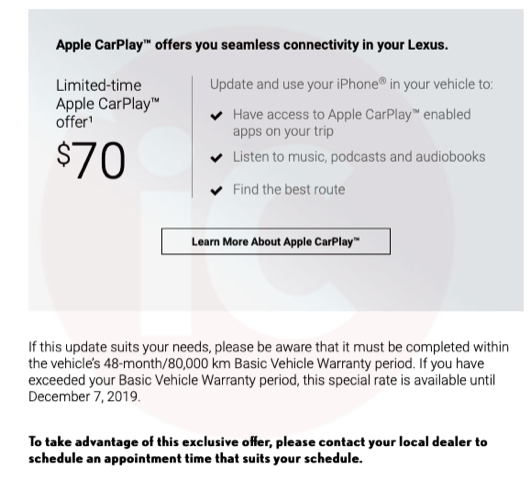 Apple, Google, Amazon, Meta, and Microsoft have all joined the University of Illinois (UIUC)'s Speech Accessibility Project to improve voice recognition algorithms for users with disabilities that affect speech and those with diverse speech patterns — reports Engadget. The tech giants are also joined by nonprofits like The Davis Phinney Foundation and Team Gleason in...
Nehal Malik
28 mins ago