Using a configuration that most professional users are most likely to buy, the folks over at The Verge have published a comprehensive review of Apple’s super-expensive 2019 Mac Pro with an aim to investigate Apple’s performance claims and what pro users might experience if they upgrade to this machine. 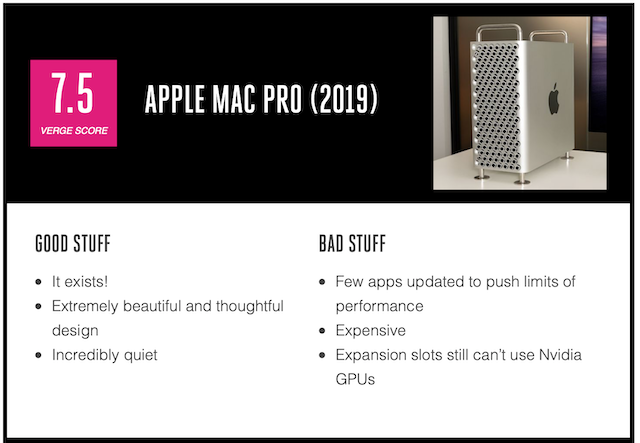 The review unit featured a 3.2GHz 16-core Intel Xeon W processor, two Radeon Pro Vega II graphics cards, 96GB of RAM, 1TB SSD and Apple’s new Afterburner card, all of which added up to US $16,599 worth of Mac Pro.

There are major differences between the 2013 Mac Pro and this new machine — the most important being that Apple appears to have learned some key lessons from that machine. This new Mac Pro has far more raw capability, far more cooling ability, and far more room to grow than the old round Pro. But it’s still true that very little pro software really takes advantage of the technology bets Apple’s made with this machine, and it’s not a must-buy for every pro user until the software ecosystem evolves.

You can catch the full review with all the technical details on the source page.