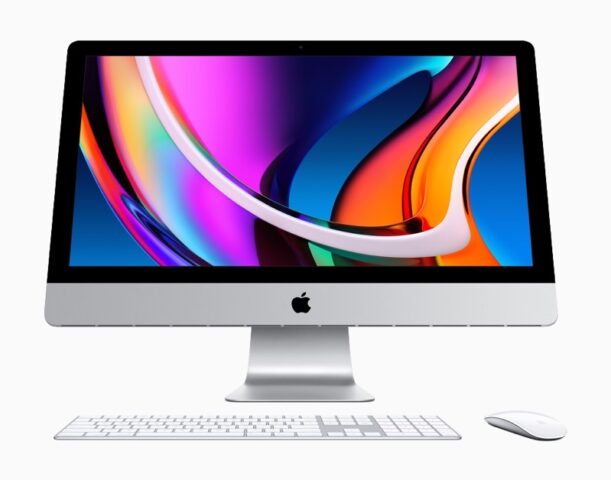 The new machine is a powerful send-off for Intel-based iMacs, as the company makes the bold transition to its own ARM-based Apple silicon later this year. And it’s quite the machine, according to early reviews, which we’ve put together a quick roundup of down below.

Dieter Bohn from The Verge praised the iMac’s new webcam, which he says is not only better quality than previous iterations, but is also smarted and safer due to the inclusion of the T2 Security Chip:

The webcam isn’t just better because it has more pixels; it’s also better because Apple is finally applying some modern image processing to the video stream. The iMac has a T2 chip, which is used to control lots of the components in the Mac. Apple is using it to process certain elements of this webcam’s image. It is able to do tone mapping, exposure control, and face detection.

The face detection is for prioritizing keeping your face well-lit with accurate skin tones. I can move my face around in the frame and see it adjusting the exposure in real time, ensuring that my face is never too dark or blown-out. It feels very much like what the iPhone does with faces. (Apple says it’s not doing any face smoothing, if you’re wondering.)

It works really well, and luckily, it doesn’t just work in Apple’s own apps. Since these fixes are coming via the T2 chip, the improved performance is just the webcam video stream that any videoconferencing app will get.

TechCrunch notes that due to the pandemic a majority of the workforce is working from home, and professionals will need powerful machines like the new iMac to work:

After a rough first quarter due to supply issues, the demand of home laptops and desktops is on the rise as many office employees have come to recognize that remote work is going to very much be our reality for the foreseeable future. Keep in mind that Google recently moved its office reopening date to next July, and the company is very much a bellwether for the tech industry at large. If you’re going to be working from home for awhile, two things are essential: a nice office chair and a capable computer.

The biggest upgrade here is the move from the 720p camera to the 1080p one found on the iMac. As someone who’s been playing around with his home audio/video setup during the pandemic while TechCrunch enters the brave new world of virtual tech conferences, it’s something that I’ve had a keen eye on. I’ve been suggesting since the outset of the pandemic that the next generation of laptops and desktops are finally going to be getting serious about microphones and webcams, after years of letting smartphones lead the pack.

Meanwhile, Todd Haselton from CNBC praises the 1080p webcam as well, especially as a fantastic upgrade for folks who are working from home right now:

The 1080p camera is great, too. Again, I spoke with several people who were also using the new iMac, and over a relatively fast Wi-Fi connection, everyone looked really clear throughout the call. It’s a nice bump from the 720p cameras Apple typically uses on its computers, which I’ve complained about in the past. This is a problem with many computers by the way, not just Macs. Tech companies tend to put their best cameras in phones and tablets, so it’s good to see laptops and desktops getting better cameras, especially now while we’re all video chatting so much more.

Jason Snell of Six Colors showered praise on the optional $500 USD nano-texture display, speculating that the feature will be the “single biggest reason” people decide to upgrade to the new iMac:

But here’s the thing: It’s spectacular. The nano-texture glass doesn’t stop all light from bouncing off the display and back into your eyes, but it cuts it down and diffuses it remarkably. Unlike so many add-on films and coatings that cut down on glare but make a display feel murky or muddy, the iMac’s display feels unnaturally clear. Even with a window directly behind me, I could see everything on the screen clearly.

And Caitlin McGarry of Gizmodo has gone ahead and put the new 27-inch iMac through its paces and revealed plenty of benchmarking scores for Apple’s latest desktop computer. The results are certainly positive.

The couple of benchmarks I’ve run since the iMac arrived on Tuesday indicate that this desktop is a powerhouse. In the Blender test of CPU performance, the iMac rendered an image in 2 minutes and 19 seconds, which is incredibly fast—it’s more than two minutes faster than when we benchmarked Intel’s 10th-gen Core i9-10900K processor on its own. On Geekbench 4, a synthetic test of overall system performance, the iMac’s single-core score of 6382 and multi-core score of 42417 impressed us all. Joanna Nelius, Gizmodo’s resident PC and processor expert, exclaimed: “What the hell did Intel do to this CPU?” We plan to run more benchmarks in addition to real-world tests, but these early numbers are promising.

Overall, the new iMac seems to offer some big improvements, specs wise, compared to its predecessor, and looks set to be Apple’s best all-in-one yet. The upgrades to the webcam and microphones are especially welcome for anyone working from home. However, Apple has stuck with the same design as previous models, and it’s about time we saw a new look.