The 7th beta of tvOS 11 released today by Apple is found to contain assets referencing to “J105a”, which has previously been revealed as the code name for an upcoming 4K Apple TV, MacRumors is reporting. Developer Guilherme Rambo shared a screenshot earlier today on Twitter, showing HDR image assets with a file name that includes “J105a” found inside tvOS 11 beta 7. 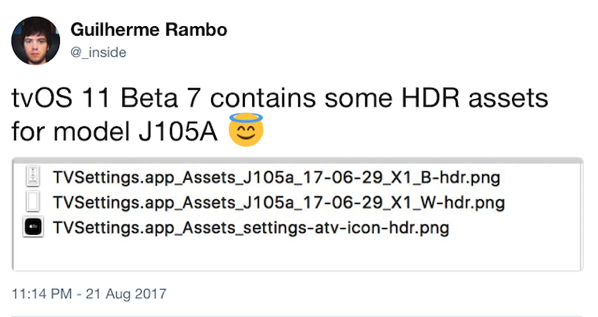 In addition to the “J105a” assets found in today’s tvOS 11 beta, references to the code name were also recently discovered in the HomePod firmware, which provided evidence that the device could support Dolby Vision and HDR10 color formats.

“Aside from Bloomberg’s report earlier this year, there has been no concrete confirmation that Apple plans to introduce a new Apple TV soon, but the continued mentions of J105a both in the HomePod firmware and in the tvOS 11 beta suggest we could perhaps see a new Apple TV announced this fall alongside new iPhone models”.

With mere weeks remaining in Ian Scott's term as chairman of the Canadian Radio-television and Telecommunications Commission (CRTC), one telecom expert has said his tenure has proven "disastrous for public confidence" in the regulator. "I think it’s been disastrous for public confidence at the CRTC at the very time that the government wants to hand...
Nehal Malik
37 mins ago