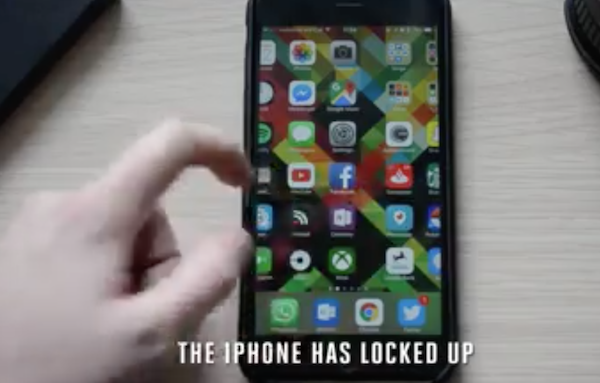 Discovered by Reddit users, this five-second video will force your iPhone to lock up and freeze, The Verge is reporting. All you need to do is click the MP4 file and watch it to experience the problem. Every iPhone tested so far seems to get locked up shortly after playing the video. The bug has been tested on multiple iPhones running the latest iOS 10.1 updates, as well as beta versions of iOS 10.2.

In our video demonstration of the bug, you’ll see that a link to the video, delivered via iMessage, will make iOS 10 play the file in the default player. It appears that the video is corrupt, generating a loop that causes the iPhone to crash around 10 seconds after watching it. We’re not linking to the video for obvious reasons, but it appears to only crash devices when it’s sent as a link rather than simply transferred as a file.

Apparently the only way to recover from the crash is to hold the power button and home button at the same time to perform a hard reset. An iPhone will work normally once it has rebooted.

A similar bug was discovered last year, where a string of text disabled the iMessage app on iPhones, which was addressed by Apple with an iOS update later on. Similarly, Safari started randomly crashing on iPhones due to a software issue earlier this year,, that was quickly resolved by an iOS update as well.

Apple is yet to issue a statement on the new crash problem. In the meantime, check out the video here demonstrating the bug.

[caption id="attachment_382288" align="aligncenter" width="1920"] Image: @OnLeaks and @Smartprix[/caption] Samsung's upcoming flagship smartphone, the Galaxy S23 Ultra, has just leaked in high-resolution renders that reveal its design and more. The leaked renders come from Smartprix and known tipster @OnLeaks. Samsung is months away from actually unveiling the Galaxy S23 series, which is being developed under the...
Nehal Malik
11 mins ago

Amazon is holding a virtual event right now, announcing new devices this year ahead of the holiday season. The first announcement was the new Kindle Scribe, which is the company’s largest e-reader that now includes writing capabilities. Kindle Scribe has a 10.2-inch 300-ppi HD display that’s also front-lit, and the included pen “never needs charging.” […]
Gary Ng
49 mins ago

Apple has kicked VK, Russia's take on the social media network Facebook, off the App Store globally to comply with the latest tranche of British sanctions — reports The Guardian. VK, formerly known as VKontakte, said on its website that the mobile app would continue to work on smartphones it was already installed on. However,...
Nehal Malik
51 mins ago