Earlier this week, Rogers CEO Guy Laurence took the opportunity to call out Bell on the GameCenter Live dispute, calling the company a “crybaby” during its earnings call.

Bell expressed its concerns about Rogers’ new NHL app, which offers users multiple camera angles and interactive features, telling the CRTC that these features violate certain regulatory rules requiring content created for broadcasters to be available to all its competitors.

“He went further, suggesting that Bell’s own bid for the coveted NHL hockey rights wasn’t innovative, theorizing that’s why it lost, and now is “complaining and trying to stifle innovation” over the Rogers GamePlus mobile app.”

The CRTC says they are reviewing the complaint, but they have not issued an official statement yet. Laurence said he does not believe that Rogers has violated any regulations and will continue to focus on delivering innovation to its customers.

Managing director of the SeaBoard Group in Montreal Iain Grant said that Rogers’ deal with the NHL was strategic and innovative. In a statement he said:

“I think Rogers had a strategic coup in purchasing the rights to the NHL. They paid money for it. Bell didn’t. All the whinging in the world isn’t going to fix it. Kleenex is in Bell’s future.”

Carmi Levy, an independent tech analyst, thinks that Laurence’s comment about Bell being a “crybaby” was to turn the attention away from Rogers’ poor quarterly results. Levy said:

“It’s real easy to throw a firecracker to other side of the room. On the surface, this is Guy Laurence being Guy Laurence. We expect this from him.” 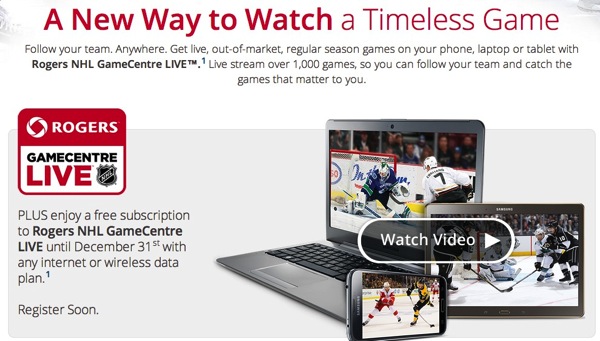 Laurence was brought in as CEO of Rogers in December of last year with the intent of shaking up the wireless market in Canada, and it looks as though he is doing exactly that.

Late last year, Rogers and the NHL signed a 12-year $5.2 billion broadcast deal which gives the Canadian carrier rights to all games in Canada.

In addition to giving Rogers exclusive rights to all playoff and Stanley Cup Final games, the agreement also gives the carrier exclusive rights to special events such as future NHL All-Star Games. The deal also guarantees that there will no longer be any restrictions when viewing a game from a specific region.