According to an alleged benchmark of the new iPad Air 2 published on iphonebenchmark.net (via AppleInsider), the A8X CPU may feature a triple-core processor with 2 gigabytes of RAM. The source notes that based on Apple’s IPSW files available to developers, the benchmark showing a new “iPad5,4” model appears to be a LTE-capable iPad Air 2. 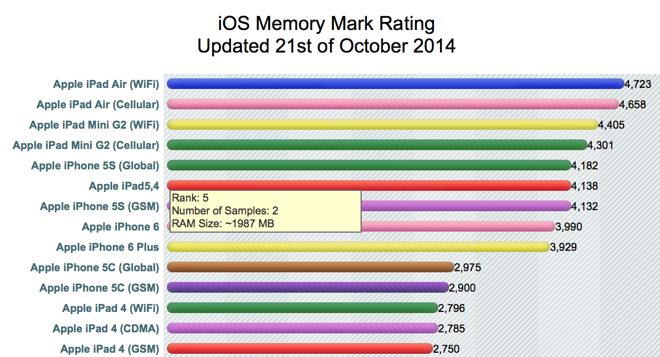 Another test published to the same site focused on RAM speed also appears to show that the iPad Air 2 has 2GB of RAM, as opposed to the A8 chip which has 1GB of RAM. These benchmarks however represent an out-of-date testing tool not optimized for assessing the performance of Apple’s latest hardware, which according to the source, may explain why the iPad Air 2 performs poorly in some of the tests.

“If true, the details would be in line with a purported iPad Air 2 logic board that leaked earlier this month, just days before Apple took the wraps off its latest flagship tablet. That picture showed an A8X chip with 2 gigabytes of memory from an Elpida RAM module. Apple opts not to reveal the specific technical specifications of its hardware, instead focusing on performance improvements that are of more value to prospective buyers. Regarding the A8X chip, Apple has simply said that it’s 40 percent faster than the A7 processor found in the first iPad Air.”

So while the iPad Air 2 receives a significant processor upgrade, the new iPad mini 3 keeps the A7 chip from last year.