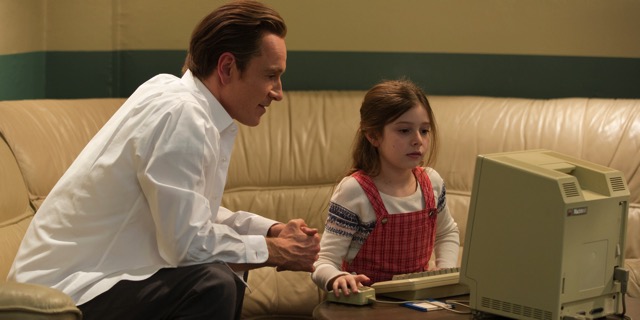 In an interview with BusinessInsider, hours before the ‘Steve Jobs’ premiere at the New York Film Festival, the film’s screenwriter Aaron Sorkin revealed that his meeting with Jobs’ daughter Lisa Brennan-Jobs before writing the movie’s script proved to be invaluable. In the new Steve Jobs movie, one of the major themes is Apple cofounder Steve Jobs’ relationship with his daughter. “At first I didn’t know what I was looking for,” Sorkin said. “Lisa didn’t speak to Walter Isaacson when Walter was writing the book because her father was alive at the time”.

“But she was willing to speak to me. She was able to tell stories about her father that weren’t necessarily flattering stories, but she would tell the story and then show me how you could see he really did love her.” Sorkin said hearing her tell those stories made him want to have a major part of the film be about the father-daughter relationship.

Brennan-Jobs is featured in all three parts of the film, which looks at the launch of the Macintosh, Jobs’ NeXT, and the iMac. In a heartbreaking sequence in the first act, Jobs rants that Brennan-Jobs is not his daughter and that the Macintosh, though named “Lisa,” is not named after her.

When Steve Jobs launched Apple, he denied he was Lisa’s father, even when a court-ordered DNA test proved that he was. Jobs gave only $500 a month to Lisa’s mother, Chrisann Brennan, for child support, even though he was worth more than $225 million.

“Steve Jobs” opens in theatres for public viewing this Friday, which according to Fortune’s Philip Elmer-DeWitt, is a “must see”.

If you care about Apple, it’s a must-see. For the rest of you, not so much.

To say I’ve been looking forward to this movie is an understatement. Apple is my beat. Aaron Sorkin—whose credits include The West Wing, Moneyball, and The Social Network—is my favorite screenwriter. One of my readers counted the number of stories I’ve already written about the project. This will be my 18th. To cut to the chase: I loved it.

Are you excited about the new Steve Jobs movie?