According to a series of independent tests performed by a design agency as part of a promotion for its own charging stand, the AirPods Max battery life is found to live up to Apple’s claims of “up to” 20 hours with both ANC and spatial audio in use, 9to5Mac is reporting. 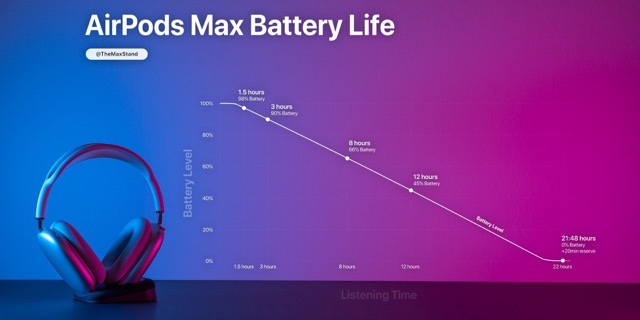 The company used fully charged AirPods Max and played the Global Top 100 playlist from Apple Music on an iPhone in a loop to test the battery life. The volume was turned up to 75% with active noise cancellation also turned on.

The AirPods Max lasted around 22 hours, before they turned off and disconnected from the iPhone. They also found out that the AirPods Max battery percentage indication is inaccurate.

It took more than 1 hour to go from 100% down to 99%. While the rest of the chart shows a more linear discharge, the same behavior can be seen at the end, when it again took around 1 hour from 1% battery until they disconnected. Keep in mind, this relies on Apple’s displayed battery level and might not reflect the actual battery charge itself.

Lastly, Apple’s claim that if you do run out of power, charging the headphones for just five minutes will get you another 90 minutes of use, was also found to be accurate.

For more details on the tests performed, check out the source page.