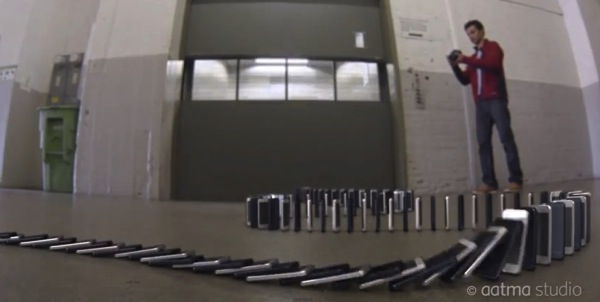 Back in August of 2011 Aatma Studio released a viral concept video that showcased an iPhone 5 with a laser keyboard and holographic display. The designers are now back in the mix as they have released a crazy 10,000 iPhone 5 domino concept to show off the power of NFC, should it come to the iPhone.

The video below may look believable but it’s not (who in their right mind would spend $7 million dollars to make a video?). Aatma Studio explains their thought process behind the video:

Epic 10,000 iPhone 5 Domino showcases 10,000 iPhones (that’s right TEN THOUSAND iPhones) falling neatly in patterns. These CG iPhones’ feature NFC (Near Field Communications) concept that enable content to be passed on from one iPhone screen to another.

This iPhone video is imagined as an advertisement for the iPhone 5 concept feature of NFC. If iPhone 5S comes with the NFC feature, this could be a pretty neat iPhone commercial.

What do you think? Did this video fool you? These guys are good.

Google today unveiled its long-rumoured smartwatch, the Pixel Watch, during the 'Made by Google' launch event. Pixel Watch features a circular design with a curved top that gives it a dome-like appearance. The screen is protected by a Custom 3D Corning Gorilla Glass cover that's tough and scratch-resistant. Google's Pixel Watch comes with an always-on...
Nehal Malik
17 mins ago