If you haven’t started looking for a gift for mom, Amazon.ca wants you to buy her a Kindle reader. The e-ink model has been discounted to $59 with free shipping ($20 off), as part of a Mother’s Day promotion. 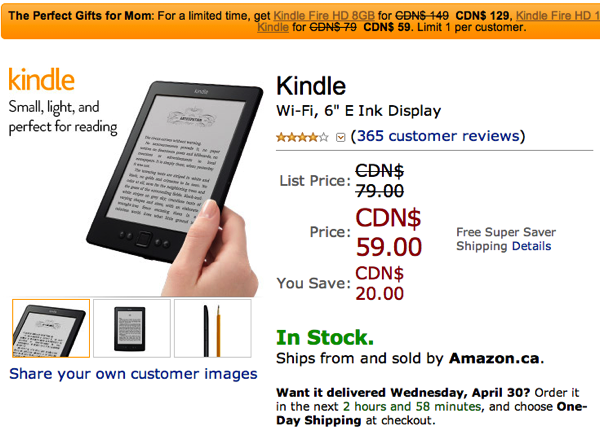 Other promotions right now geared as ‘gifts for mom’ include the 7-inch Kindle Fire, seen as a cheaper rival to Apple’s iPad mini:

The cool thing about the Kindle is if you have an iPhone or iPad, you can sync your books to the Amazon iOS app. Your last page is synced to the cloud so you can pick up where you left off on either your Kindle (which might stay on your bedside table) or your iPhone or iPad while you’re on the road.

The Kindle sale isn’t as good as the $49 sale we saw during last Christmas, but it’s still decent at $59 for a gift for mom if she loves to read.

Click here to jump on the e-ink Kindle for $59 with free shipping while it’s still available. Amazon says there’s a limit of one per customer.