In December 2013, Amazon unveiled plans for Prime Air, its ambitious plans to launch a drone delivery service in the next 4-5 years which would deliver packages in 30 minutes from its distribution centers in the U.S.

Unfortunately for the company, the U.S. Federal Aviation Administration (FAA) has prevented the company from launching its drones in Washington State. So what to do? Head to Canada of course!

The Guardian was granted exclusive access to Amazon’s secret plot of land in British Columbia, 2000 feet (610 metres) from the U.S. border to test and develop its delivery drones, which it has been doing so for the past few months:

Amazon has acquired a plot of open land lined by oak trees and firs, where it is conducting frequent experimental flights with the full blessing of the Canadian government. As if to underline the significance of the move, the test site is barely 2,000ft from the US border, which was clearly visible from where the Guardian stood on a recent visit. 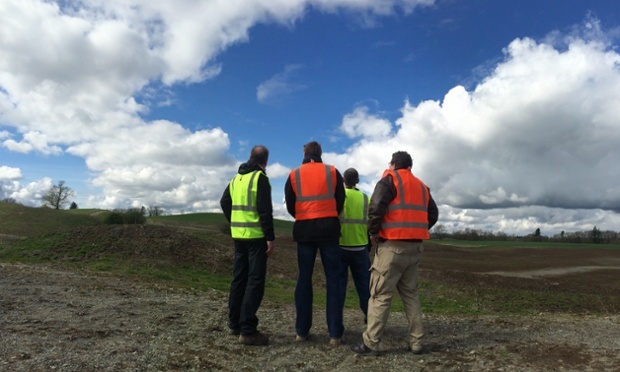 The publication notes as it watched the tests, “three plain-clothed security guards kept watch from the surrounding hills.”

Gur Kimchi, the architect and head of Prime Air, said they wanted to test their service near their headquarters in Seattle, “But we’re limited there to flying indoors and have been now for a very long time. So we do what’s necessary – we go to places where we can test outside, in this case Canada.”

Early tests have focused on drone capabilities such as sensors to detect and avoid obstacles; loss of connection procedures should the link to be base be broken; stability in various types of weather such as wind; and impact on the environment.

Amazon says once these factors have been perfected, a new drone prototype will be created, which Kimchi says would ‘utterly safe’ and unlike anything seen before.

“We are going to end up with unique shapes, unique vehicles. The most important part is to develop strong confidence that our system is safe and that we can demonstrate that to customers,” he said.

“You can build a very different world. It can be faster, and safer, and more economic and more environmentally friendly – all of those things, all at the same time.”

An FAA spokesperson told The Guardian “we base our approvals for unmanned aircraft operations on an assessment of the risks to other aircraft and to people and property on the ground. We have been working diligently with Amazon to get the information we need.”

Compared to Transport Canada, which released 1,672 commercial drone certificates alone in 2014, the FAA has only allowed 48 testing licenses, despite receiving over 750 requests from American businesses.

The FAA believes drones cannot be flown safely automated and must require humans controlling them within eyesight. Amazon wants to utilize airspace above 200 feet (above most buildings) but below 500 feet, where aviation begins.

Amazon earlier this month warned Congress the U.S. risks being left behind in the drone delivery business due to FAA regulations, risking the loss of hundreds of millions of dollars of investment.

While it could take many, many years for this drone delivery service to launch, the idea itself is pretty amazing. It will be interesting if the FAA will relent to Amazon and other companies wanting to launch drone delivery services–it looks to be the way of the future (that is if you’re near an Amazon warehouse)?