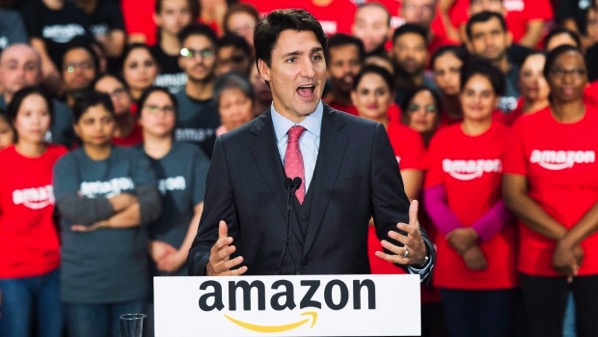 Citing its French-language arm Radio-Canada, a new report by CBC News claims that Amazon, Google and Microsoft have made over 100 registered contacts with influential members of Canada’s Liberal government over the past 12 months, which has raised ethical issues in light of the government’s controversial agreement with Netflix.

Radio-Canada pored over the federal lobby registry and found Amazon had 99 registered communications with decision-makers, while Google had 37, including one with Prime Minister Justin Trudeau and his two closest collaborators: chief of staff Katie Telford and principal secretary Gerald Butts. Microsoft, Netflix and Facebook also had meetings with federal officials.

Some of the companies showed interest in intellectual property, arts and culture, immigration and broadcasting, according to their lobbying profiles.

MP Pierre Nantel, the NDP’s heritage critic, said in an interview, “We are heading towards a total and brutal deregulation that worries everyone”. He added that the government hasn’t hidden the fact that it would like the American e-commerce giant Amazon to set up its second head office in Canada. Meanwhile, Amazon has said it’s “seeking to influence policy direction related to cloud based services”.

Similarly, representatives of Netflix, which recently pledged $500 million to fund Canadian productions over five years and build a permanent production presence in Canada, had 16 registered communications in eight meetings with Canadian decision-makers. The deal has been strongly criticized in Quebec’s artistic and political circles.

Microsoft representatives have also had access to some of the government’s most influential decision-makers, who are believed to have met the Canadian Prime Minister on two occasions, once alone and once surrounded by Butts, Telford and Finance Minister Bill Morneau.