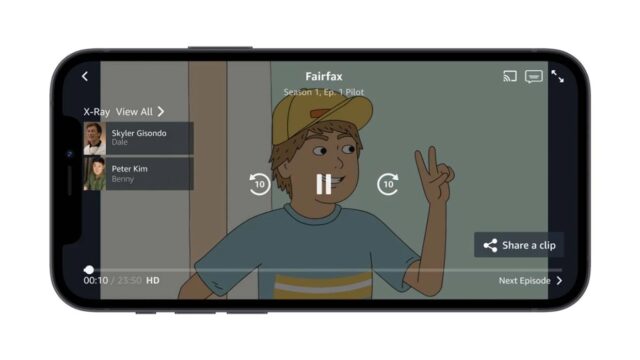 Amazon will be introducing a new video clip-sharing feature in the Amazon Prime Video app. This will enable viewers to share their favourite moments over social media and through direct messages.

As announced by Amazon, the feature will first be rolling out to users in the US. This will serve as a limited testbed prior to a wider launch. Initially, the feature will only be accessible on iOS devices. A limited amount of content will be supporting the feature as well. At launch, only ‘The Boys,’ ‘The Wilds,’ ‘Invincible’, and ‘Fairfax’ will have the clip-sharing tools enabled.

While viewing any of the aforementioned titles, users can tap on the ‘Share a clip’ button and create a 30-second clip from the content. Once the button is pressed, the content will pause and the user can select the 30-second window they’d like to use and edit the video. The user can also preview the clip prior to sharing. The Amazon Prime Video app will also direct users to the ‘Share’ button which will upload and share the clips to social apps such as Twitter, Instagram, WhatsApp, Messenger, and iMessage.

Amazon is currently the first major streaming service to incorporate this sort of sharing feature. This puts Amazon Prime Video ahead of the likes of Netflix and Disney+ when it comes to sharability. In fact, many other platforms dissuade users from capturing clips and screenshots of their content while using the app.

Amazon has noted that it intends to support more titles in the future. There’s no word on when the feature will be available in Canada and other markets.