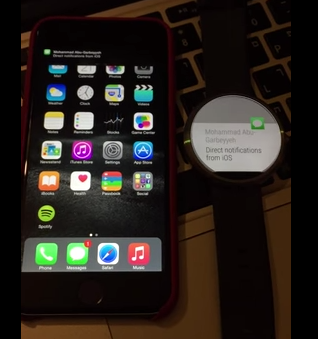 The video below shows his Moto 360 smart watch (which just requires an APK installed) receiving an iOS text notification from his iPhone. The two devices were connected using Apple Notification Center Service (ANCS) (built into iOS 7 or higher) and Bluetooth, similar to how the Pebble watch connects to your iPhone.

While you can only receive text messages as shown in the video, it does reveal an Android Wear device was able to connect to an iPhone. Abu-Garbeyyeh says he may release the companion app online in the near future, but noted on Twitter “I’m not sure whether to make it open source or not yet.”

Pretty neat, but without further functionality, definitely doesn’t make it worth it to buy a Moto 360 watch just to try this hack.