A new Mac application developed by a group of researchers at Princeton University allows you to figure out what all the smart devices in your home, including those with virtual assistants like the Amazon Echo or Google Home, are really up to, CBC News is reporting. 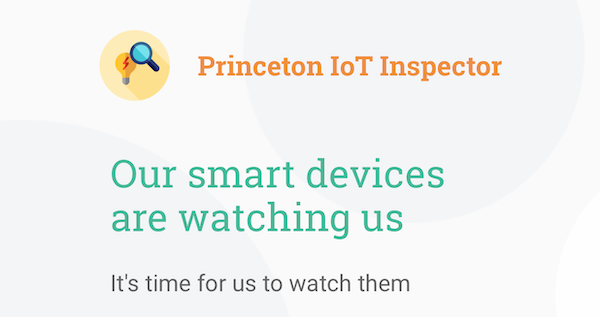 The tool called the Princeton IoT Inspector, not only tracks the data each smart device transmits but also who receives it. “Our smart devices are watching us. It’s time for us to watch them,” say the developers of the app who believe that consumers should know where all the information is being collected within their smart houses and to whom it is being transmitted.

The macOS app is said to use a technique called ARP spoofing which is sometimes used to redirect traffic from a particular IP address and gain access to it. Once downloaded and installed on your Mac, it monitors network activities of all of the smart appliances connected to your network:

The app shows what data each device collects, who the device contacts online, how much data is exchanged and how often.

The IoT Inspector reveals just how active these devices are — even when we’re not using them. An Amazon Echo, for example, home to the digital assistant known as Alexa, maintains its network connection even if it has not detected the wake word and the microphone is turned off.

In practice, this means the home assistant is checking in with Amazon servers — as well as web-hosting services, and apps the user is subscribed to such as Spotify or Apple Music — every few minutes.

It was recently reported that thousands of Amazon employees around the world who help improve the human speech comprehension of Alexa have access to data that can be used to find a customer’s exact home address.