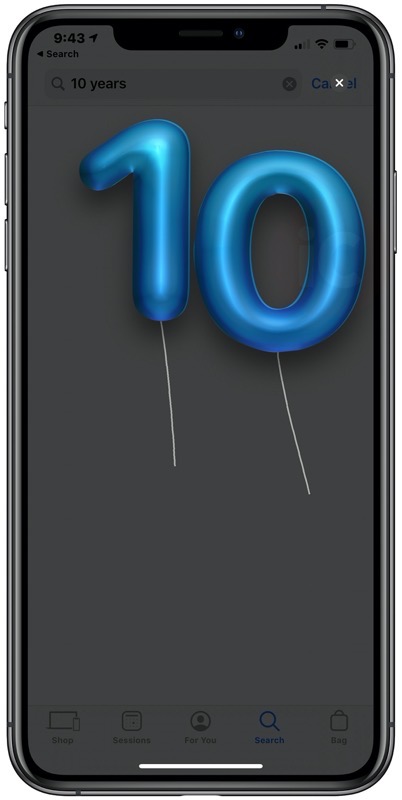 Apple has hidden a little gem within the Apple Store iOS app, to celebrate 10 years of the app.

When you search for “10 years” within the Apple Store app (the app to buy Apple products, NOT the App Store), you’ll see floating balloons appear showing off “10”. If you tap each balloon, they’ll pop.

🥳 Surprise! Hidden inside the Apple Store app is a new Easter egg that celebrates the app’s 10th anniversary. Search for “10 years” and watch the balloons appears. Tap each one to pop it. 🎈 pic.twitter.com/YsGdKP8r5L

The Easter egg was spotted by Michael Steeber. You can check out a video of the hidden surprise in the video above.

The Apple Store retail app launched back on June 15, 2010, first made available for users in the United States. The launch of the app allowed Apple customers to place reservations for the newly announced iPhone 4 at the time. Canadians were shut out of course, but those savvy enough to have a U.S. iTunes account were able to download and access the app. Ah, the memories.

Apple's long-awaited AR/VR headset may not start shipping until the second half of 2023 due to a delay caused by some "software-related issues," according to TF International Securities analyst Ming-Chi Kuo. Kuo previously had the headset pegged for a second-quarter release. He said in a tweet that his sources indicate components for the mixed-reality headset...
Nehal Malik
38 mins ago