The next time you ask Siri what she is wearing, you can do so in the knowledge that it’ll at least be coloured green, thanks to Apple’s environmental efforts. 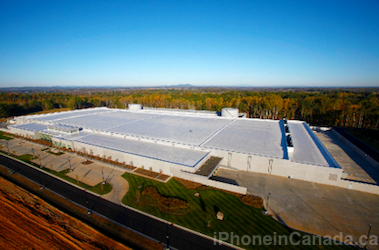 In the company’s updated environmental report, Apple describes two very large steps it is taking in its quest to become ever more environmentally friendly. The first step is the previously reported solar array being built adjacent to the $1 billion dollar data center in Maiden, North Carolina:

This is a huge undertaking on its own, but the company’s second step is to build fuel cells:

Apple is building a fuel cell installation that, when online later in 2012, will be the largest non-utility fuel cell installation operating anywhere in the country. This 5-megawatt facility, located directly adjacent to the data center, will be powered by 100 percent biogas, and provide more than 40 million kWh of 24×7 baseload renewable energy annually.

To put those numbers into perspective, with both of their green power stations up and running, Apple will be providing enough renewable power to cover roughly 1/6 of their total electricity consumption WORLDWIDE. Apple states that across their worldwide facilities in 2011, total electricity consumption was 493 million kWh.  This is a phenomenal feat for such a big company and it is incredibly reassuring that Apple is so conscious of their impact on the environment. If all companies could follow their lead, we would be in a much better situation globally.

Apple goes on to highlight the fact that the cleanest energy is that which is never used, and they have proved the fact by stating that the data center has achieved the coveted LEED (Leadership in Energy and Environmental Design) Platinum certification from the U.S. Green building Council. The energy efficient design elements which helped them achieve this certification include, among others:

The full report can he seen here. It makes for an impressive read that highlights yet another reason why Apple is a global leader.