The folks over at AnandTech have just published their comprehensive performance review of Apple’s latest A15 SoC, which powers the company’s flagship iPhone 13 line-up, calling it “faster and more efficient” than its predecessor. 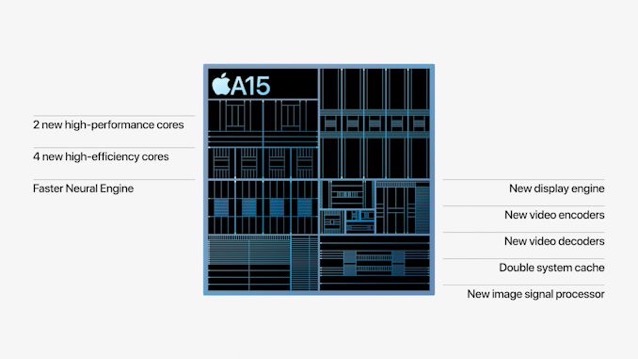 Apple’s A15 chip features a faster Neural engine, a new 4- or 5-core GPU, and a whole new display pipeline and media hardware block for video encoding and decoding, in addition to ISP improvements for camera quality advancements.

Compared to the A14, the new A15 increases the peak single-core frequency of the two-performance core cluster by 8%, now reaching up to 3240MHz compared to the 2998MHz of the previous generation.

When both performance cores are active, their operating frequency actually goes up by 10%, both now running at an aggressive 3180MHz compared to the previous generation’s 2890MHz.

The efficiency cores of the A15 have also seen massive gains, this time around with Apple mostly investing them back into performance, with the new cores showcasing +23-28% absolute performance improvements.

The experts say that while the iPhone component design may be limiting the SoC from achieving even better results, especially in the newer Pro models, it is still far above the competition.