Could we see AirPods coming in new colours? According to information received by leaker @OnLeaks, this could be a possibility this fall.

The leaker says he received details from a “new and yet unconfirmed but seemingly reliable source,” regarding upcoming AirPods refreshes.

As for the anticipated AirPods case with wireless charging, that is said to be coming soon, but will only ship with current AirPods. We’re guessing any release would coincide with Apple’s delayed AirPower charging mat.

For new AirPods 2, they will launch this fall with the possibility of new colours, claims this unnamed source. No other details were provided regarding colours, but everybody is probably hoping for AirPods in Space Grey or Space Black.

Again, I got these details from a yet unconfirmed source thus I can't vouch them at 100%. BTW I said "likely this fall"… But the wireless charging case shipped with current AirPods information seems very likely reliable… Wait & See… 😉

Yesterday, a questionable report claimed new AirPods 2 would come with improved sound and bass, plus include some sort of new grip to make the slippery earbuds easier to hold.

Apple’s AirPods continue to gain in popularity and have now “gone viral” according to U.S. search interest data noted by Above Avalon, recently reaching the 100 mark on Google’s 100-point scale during the holiday season: 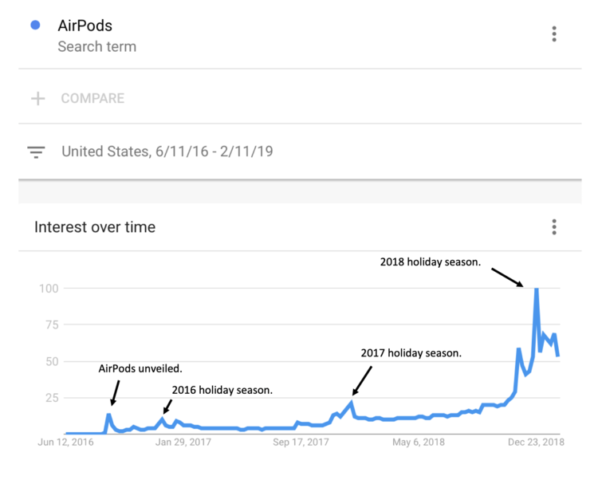 Data shown from two weeks ago showed AirPods interest on Google surpassed Apple Watch for the first time in the U.S.

AirPods were similarly hard to find in Canada during the holidays, as the earbuds have gone from “mockery to millennial status symbol”.