Apple on Wednesday finally unveiled its long-rumoured second-generation AirPods Pro. The original AirPods Pro launched back in 2019, and reports of a refresh have been making the rounds at the rumour mill since 2020. 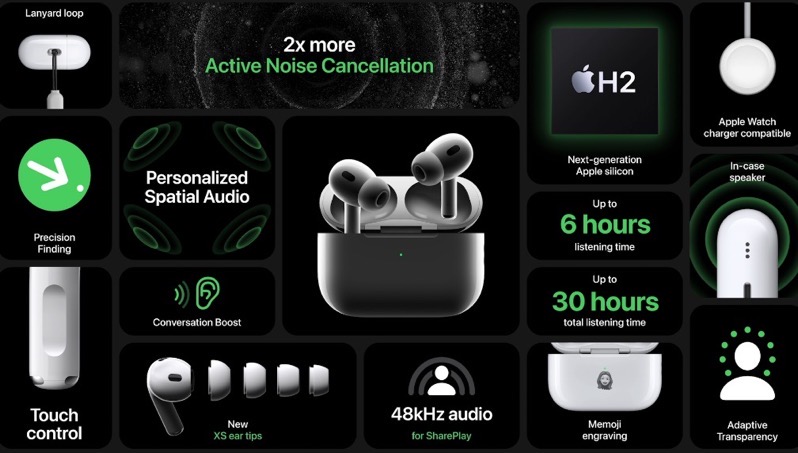 AirPods Pro 2 feature a healthy serving of upgrades, especially for a generational update that was almost three years in the making.

Apple has equipped the second-generation AirPods Pro with a new low-distortion audio drive and custom amplifier for crystal-clear sound and wider coverage of the frequency range.

AirPods Pro 2 are powered by Apple’s next-generation H2 chip, which enables better Spatial Audio. The 2019 model, meanwhile, had an H1 chip under the hood.

According to Apple, AirPods Pro 2 boast Active Noise Cancellation (ANC) that is twice as strong as their predecessors, along with an improved Adaptive Transparency mode.

Apple has also debuted a new pair of “XS” ear tips with its second-gen AirPods Pro to offer a better, more personalized fit to more customers.

There are even more ways to customize your aural experience with AirPods Pro 2. Thanks to Personalized Spatial Audio, AirPods Pro 2 owners can use the TrueDepth camera on their iPhones to scan their heads and create a 3D model of their ear canals that are used to better tune Spatial Audio to their specific physiology.

In addition, AirPods Pro 2 finally let users adjust the volume by sliding their fingers along the touch controls on the stem.

What’s more, the case the new AirPods Pro come in brings almost as many changes as the AirPods themselves. The case now has an updated design that’s sweat- and water-resistant, and it also includes a lanyard loop.

Apple has added Find My tracking support to the case itself and not just the earbuds this year, with the addition of its U1 chip. The case even has a built-in speaker to help locate it. It still sports MagSafe tech for wireless charging, but it can now also charge on an Apple Watch charger.

As for battery life, AirPods Pro 2 offer a generational leap in that department as well. The earbuds alone manage up to six hours of listening time with ANC enabled, an increase of 1.5 hours over the previous generation.

Users can get another four charges from the case, making for a total of up to 30 hours of listening time with ANC enabled. That’s a full six hours more than first-generation AirPods Pro.

AirPods Pro 2 are priced at $329 CAD, the same launch price as the original AirPods Pro, which can be found for $249 on Amazon.ca.