Apple has issued a press release to note SVP of iOS Software, Scott Forstall, and John Browett, SVP of Retail, will be leaving Apple:

Apple also announced that Scott Forstall will be leaving Apple next year and will serve as an advisor to CEO Tim Cook in the interim.

Additionally, John Browett is leaving Apple. A search for a new head of Retail is underway and in the interim, the Retail team will report directly to Tim Cook.

The release notes the executive management changes will “encourage even more collaboration between the Company’s world-class hardware, software and services teams.”

The departure of Forstall so suddenly comes as a surprise. Sure, he was responsible for the Apple Maps fiasco in iOS 6, but the man was formerly profiled as a ‘mini Steve Jobs’ and even the next ‘CEO-in-waiting’. Forstall sold $38.7 million worth of vested Apple shares in May, with over 250,000 RSUs remaining at the time that do not vest until 2013-2016 as an incentive for him to remain with Apple. Well, it looks like that has changed.

The important questions: iOS needs a new chief–who will fill the void, aside from Craig Federighi? Where will Forstall head to next?

Browett’s departure doesn’t come across as a shock considering he was rumoured to be the source of internal Apple retail strife. He’s done, and his short stint at Apple reflects how management felt about his decisions for retail.

Update 1: Apple has updated their executive bio PR page as expected–Forstall and Browett are already gone: 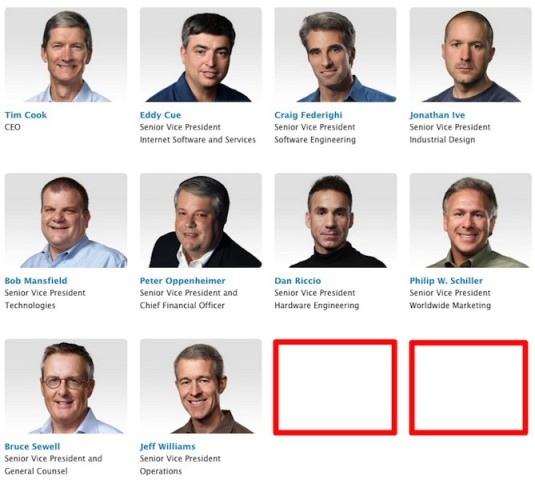