Apple CEO Tim Cook arrived in India yesterday, not only to visit the location of the company’s planned Accelerator facility, but also to hold discussions with business leaders and politicians. 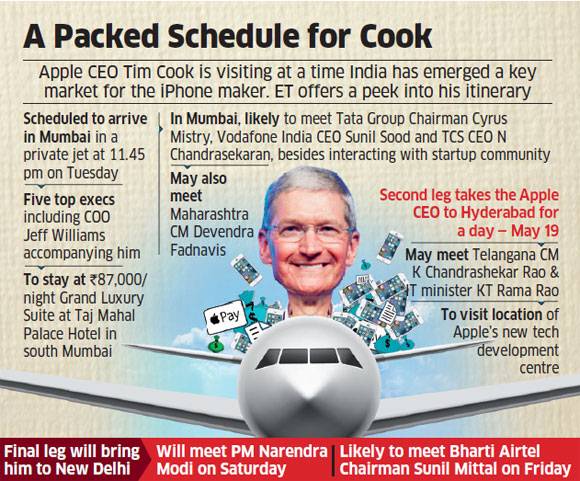 According to India’s Economic Times, Tim Cook’s schedule also includes a meeting with top wireless players, as the country’s widening 4G network could boost iPhone sales, and also have a positive effect on iPad and Apple TV sales.

As India’s biggest telcos, Bharti Airtel and Reliance Jio Infocomm, are currently on the verge of launching a nationwide 4G network, Cook will likely hold strategic talks with the wireless carrier about distribution of selling through retail stores, offers on devices, and, possibly, training of personnel.

The Apple CEO said iPhone sales will increase if Indian carriers deploy the high-speed 4G networks across the country. He had previously said the smartphones selling in India were mostly “low end”, due to the existing networks and market economics.
Besides a meeting with Bharti Airtel’s Chairman, Cook will also meet with Tata Group Chairman Cyrus Mistry, Vodafone India CEO Sunil Sood, and Tata Consultancy Services CEO NChandrasekaran, reports the Economic Times.

The newspaper has more information about Cook’s schedule: After a day in Mumbai, Cook will be in Hyderabad on May 19, meeting the Telangana CM and its Information Technology Minister KT Rama Rao. There than follows a visit to Delhi.